Two of passers who placed first in the recently released Chemical Engineer Licensure Examination results were scholars of Department of Science and Technology (DOST). 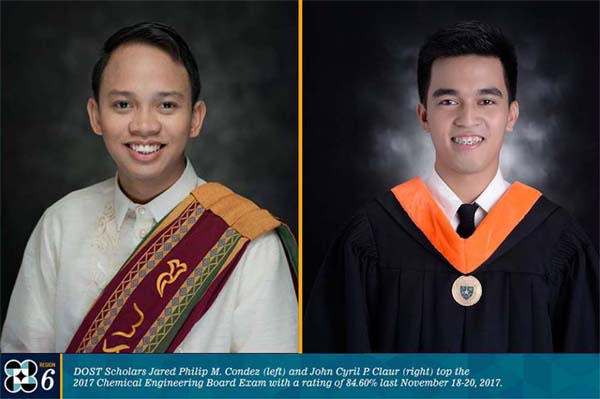 Jared Philip M. Condez from the University of the Philippines Visayas and John Cyril P. Claur from University of St. Lasalle Bacolod share the top spot as both topnotch the 2017 Chemical Engineering Board Examination with a rating of 84.60% conducted last November 18-20, 2017.

Both topnotchers are scholars of the Department of Science and Technology, the former being a Merit scholar under RA No. 2067 and the latter an RA 7687 scholar.

Meanwhile, when asked about advise for future chemical engineering board exam takers, Condez emphasized the importance of knowing one’s priorities.

“Know what your priorities are. This will help you align your mentality to the current goal– to pass or better yet to top the board exam.”, Condez said.

“A fair warning though, it is totally normal to feel butterflies in your stomach, weeks, days, and hours before the board exam. It is important to keep your composure, be calm, and try to keep a positive state of mind.”, He added.

RA 7687 Scholarship (RA 7687) also known as the “Science and Technology Scholarship Act of 1994”, provides scholarship slots to poor but deserving students whose families’ annual gross incomes do not exceed the poverty threshold limit. The other scholarship referred to as DOST-SEI Merit Scholarship Program, formerly known as the NSDB or NSTA Scholarship under RA No. 2067, is awarded to students with high aptitude in science and mathematics and are willing to pursue careers in the fields of science and technology. On the other hand, RA 10612 or Junior Level Science Scholarship is offered to third year college students who are enrolled in S&T Priority courses at any State Universities and Colleges (SUC), other private universities or colleges that are with CHED compliant programs, CHED identified Centers of Excellence (COE) or Centers of Development (COD) for the priority S&T courses and Institutions with FAAP Level III Accreditation.

The scholar must pursue a course in the field of science, mathematics and engineering leading to a Bachelor of Science degree. (DOSTVI-JRGabiota).