CineKasimanwa: Western Visayas Film Festival, the country’s largest regional festival and Region VI’s longest-running film fest is proud to present eight new films produced by the Department of Tourism – Region VI and CineKasimanwa to be presented in cinema theaters by the Film Development Council of the Philippines and CineLokal. 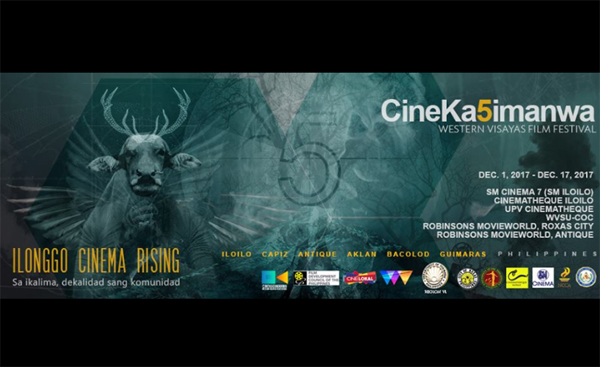 Now on its second year, the Western Visayas Grants Program seeks to promote the creativity, stories, culture and people of Region VI through different films done by award-winning and emerging Ilonggo film directors from Iloilo, Capiz, Aklan, Antique, Guimaras and Negros Occidental. Its omnibus trailer went trending in the internet and is one of the most watched regional film trailers in the Philippines.

Many filmmakers from the Philippines come from Region VI and as such there is a vibrant cinema culture within Western Visayas with films in Hiligaynon, Kinaray-a and Aklanon languages. CineKasimanwa focuses on local stories and visions with a very diverse program from full-length to shorts, narratives to experimental works, traditional to new media, special program for children and an annual program for horror, science fiction and unclassifiable films. Western Visayas has a very rich culture with many folklores, family drama and stories of locals told through generations.

Is there something as romance made in the stars? A young couple in the island of Guimaras faces the challenge of a forthcoming separation. Few days before Samuel leaves Aileen for a better job opportunity in a distant city, the latter, feeling immensely desperate, tries to stop him from leaving. Making the most out of their remaining time together, they patiently wait for a shooting star before facing the consequences of being apart.
Shot in GUIMARAS: Alubihod Beach, Manggahan festival, Holy Family Hills, Spring Bloom Farm, National Mango Research.

They say, there are no secrets we can keep. Under the full moon, we are all naked. In the midst of someone’s confusion will the presence of the full moon be able to pave his way to understand the mysteries of the inner darkness or will he just give in and fade away? This mystical drama from the director of “Mga Hilaw Nga Tikang” gets a twist that commences during the dance of the aswangs.
Shot in GUIMARAS: Suba Malawig Eco-Tour, Daliran cave, Sebario Salt Farm, Old Trappost Monastery and Bala-an Bukid Shrine.

Man is awakened by God in the afterlife and given the freedom to choose a place where he wants to spend eternity. Each choice being Man’s indulgences makes it difficult for him to decide until his final choice unravels Man’s innermost desire to question divinity via his faith.
Shot in Iloilo’s Bato Sumpit Falls, Bato Simbahan; Bucari Pine Forest in Leon; Isla de Higantes in Carles.

Leo, an enthusiastic guy, openly shows his love to his best buddy, Amara, who, in return, rejects him every now and then. Will Leo’s efforts shine through and make Amara fall for him? Antique here is not just a destination but an inspiration for this millennial romance not devoid of secrets.
Shot in ANTIQUE’s Caluya; Malunpati Cold Springs; Bagtasan Patadyong Weaving and Tibiao, a millennial love story

When a group of friends decide to go on a road trip from Iloilo to Aklan, Western Visayas, all they wanted was to escape the stress and chaos of their urban lives. When they visited the Pangihan Cave without following usual safety measures, they fell into the traps of a the mysterious cave where they will experience a real adventure they will never forget.
Shot in AKLAN: Boracay Island, Jawili Falls and Pangihan Cave.

Espionage, intrigue, trust, deception, betrayal all mix in this action-packed film from the director of the award-winning “Dungol”. A lethal virus has spread and a team of government operatives must stop a clandestine organization from spreading it in several barangays. They are brought into the beautiful islands of Antique, Western Visayas, to track the source of the epidemic only to find out there’s more than meets the human eye.
Shot in ANTIQUE’s Nogas Island in Anini-Y, San Jose, Culasi Sea Wall; Igpasungaw in Sebaste; and Dive Site in Anini-Y.

Gabriel and his daughter, Celine, has been living a peaceful and warm, loving life in the mountains. With Gabriel’s wife gone for reason unknown, he struggles to provide for his daughter. Everything was as normal as everyone else until the past starts crawling in and devouring Gabriel. The untold story of the Manggagarab overcast a shadow of despair over Gabriel and his daughter. The darkness lurking behind the thick jungle has once again crawled out onto the light of day. Once again, it is time.
Shot in CAPIZ & Iloilo: Suhot Cave in Jamindan, Cadimahan River Tours, Hinulugan Falls, Falls Camp Peralta.

Iloy follows the story of Remedios, a single mother with twins. She is faced with the challenges of single parenthood which is made even worse by the extraordinary circumstances she is plunged into. Throughout her story she is haunted by the various faces of motherhood which, to her, are ghosts of an all too real childhood with her own mother. Torn between her personal ghosts and her love for her children she is pushed to do things only mothers can bear to do.
Shot entirely in CAPIZ: Baybay Beach, Basiao, River Tour, Our Lady of Lourdes, Lighthouse.

Organizers have dropped the price of two-hour program or each full-length movie this year for only Php100.00.