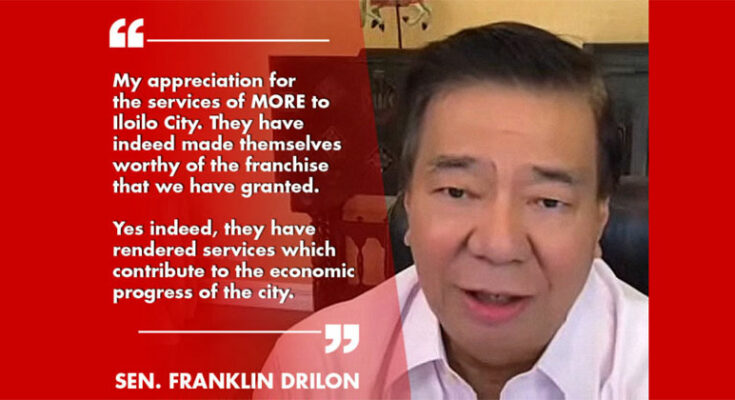 Ilonggo Senator Franklin Drilon felt the improvements in the electricity distribution system in Iloilo City and thanked MORE Power Iloilo for their services.

Drilon expressed his appreciation for MORE Power during the Senate hearing of the Committee on Public Services on House Bill No. 10306, which seeks to amend Republic Act No. 11212 and expand the franchise area of the power company to select municipalities in Iloilo Province.
In his final statement, Drilon gave a ‘note of commendation’ for MORE Power.

“I will not let this opportunity pass to spread into the record my appreciation for the services of MORE to Iloilo City. They have indeed made themselves worthy of the franchise that we have granted,” Drilon said.

“Yes indeed they have rendered services which contribute to the economic progress of the city. So let me close this by a note of commendation to the MORE for the services done for Iloilo City,” he added.

Senator Grace Poe, chair of the Committee, agreed with the recognition.

“I’m glad that you gave the recognition. Actually, the discussion is a little bit more difficult because there’s an exhibit A by MORE with the service they provided to Iloilo City,” Poe said. “So it is very hard to discount the fact that there are a lot of satisfied customers there and others would like to avail of the same.”

The lawmakers emphasized in the hearing that a lower power rate is a public interest, and electric cooperatives should work ‘double time’ to follow the lead of MORE Power in bringing it down.

Drilon expresses dismay over the high cost of generation charge being passed on to power consumers in Iloilo, saying it is in the interest of the public to have reduced power rates.He echoed the question of Sen. Win Gatchalian on why Iloilo Electric Cooperative (Ileco) could not lower its generation charge as soon as possible, brushing aside the appeal of the power cooperative to give them five to 10 years.

While Ileco plans to reduce its generation charge to P8.66 / KWh (kilowatt-hour), Drilon pointed out that it is still “more than double” compared to what More would offer.

“I’m sorry but your public interest would not allow such long period of time. It is in the public interest, particularly in Iloilo, that the power rates are reduced. You are saying that this is due to the generation charge. But to the questions of Sen. Win (Gatchalian), I don’t get a satisfactory answer,” Drilon said.

Sen. Poe will make a committee report based on the hearing and submit it to the Senate plenary for further deliberation.