Ambassador of Kingdom of The Netherlands to the Philippines Maria Christina Theresia Derckx and Ambassador John T. Holmes of Canada paid a courtesy visit to Mayor Jose Espinosa III at City Hall July 20. 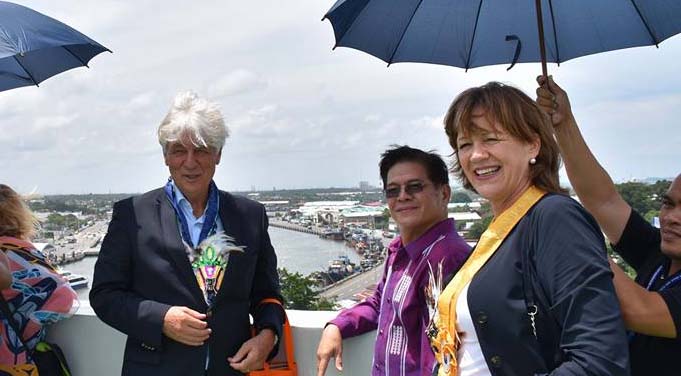 Derckx lauded how clean the city is and how friendly Ilonggos are.

“I have joined the city as ordinary citizen and I have experienced how easy it was to go around, how clean the city, how friendly the people are,” Derckx said, noting it was already her third time here.

Amazed by how clean the city is, especially the Iloilo River, Derckx said she would like to know more about Espinosa’s leadership.
“I also very much wanted to know the leadership of the city because I am very impressed by the way the city is run; what has happened to the river, how you have managed to clean everything up and make the river really an active part of the city. I understand that it is the longest walking way in the Philippines,” Derckx said.

“As we drove through the streets of your city, all I could think of was ‘katahum gid’ (very beautiful). I am delighted and pleased to be here,” Holmes said.

It was his first time to visit the city.

He shared how working Filipinos helped the economy of Canada.

“I always say that it is a win-win situation for both of us because Filipinos are learning skills in Canada and they are sending money through remittances. But many of them after they lived, worked and saved money in Canada, they often come home here and are now investing in the Philippines, and I think that works well for both of our societies. We have need for the labor and you have the need for the capital and expertise, and so we will continue to partner and have our development,” Holmes added.

Derkcx assured that The Netherlands will help the City Government in addressing flooding problems, while Holmes said he will study what are the areas where Canada can be of help to the metropolis.

Espinosa expressed gratitude to the two ambassadors stating that Iloilo City and the two countries have made good relationship in the past.

“Canada and The Netherlands have been good to us as what history would tell, that is why we are greatly honored by your presence here,” Espinosa said.

The mayor noted he was impressed with the museums, festivals, and how people use bicycle in The Netherlands in going to their work during his visit there. (Merianne Grace Ereñeta/ Iloilo City PIO)