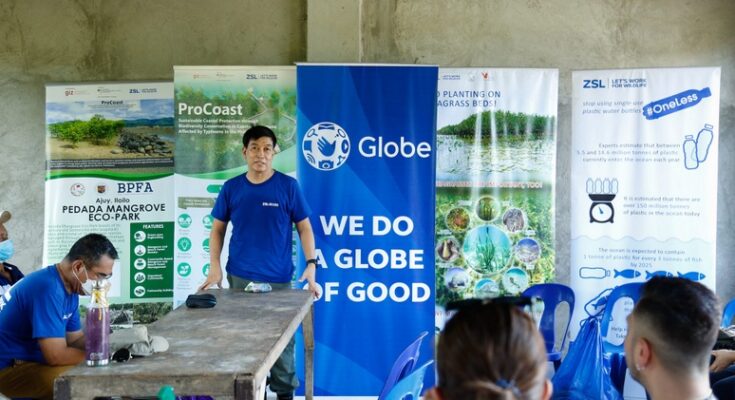 Globe, together with the Zoological Society of London (ZSL) Philippines, joined forces with a local fisherfolk association in Brgy. Pedada, Ajuy, Iloilo to further science-based mangrove conservation efforts in the area.

About 40 volunteers from Globe, ZSL Philippines, and the Brgy. Pedada Fisherfolk Association (BPFA) recently helped in the planting of more than 800 seedlings of Sonneratia alba (locally known as Pagatpat) and Avicennia marina (locally known as Bungalon, Apiapi, or Miapi) in the 3,000 sqm coastal area of Brgy. Pedada. These seeds and seedlings were collected from nearby mother trees and propagated in the local community’s nurseries.

“We want to share the value of doing a #GlobeOfGood through environmental stewardship. Globe believes that through nature-based solutions, technology and innovation, we can protect, sustainably manage, and help restore natural ecosystems to create a sustainable future for Filipinos,” said Yoly Crisanto, Globe Chief Sustainability Officer and SVP for Corporate Communications.

Mangroves are intertidal forests found in saline and brackish water that have provided a variety of goods and services critical to human well-being over a millennia. To quote Dr. Jurgenne Primavera, Chief Mangrove Scientific Advisor of ZSL: “Especially in these times of global warming and sea level rise, mangroves are at the forefront of Climate Change adaptation (as coastal greenbelts that provide storm protection) and mitigation (as carbon sinks that capture carbon at 4 to 5 times the rate of other forests, including the tropical rainforest).

Globe and ZSL Philippines are also working closely with local barangay officials and fisherfolk organizations in expanding the planting site to adjacent areas in Barangay Luca, Ajuy, which will eventually bring the total area to 2.7 hectares. Moreover, they are in close coordination with the Iloilo City local government, the Department of Environment and Natural Resources, and United Architects of the Philippines – Bahandi on possible planting of beach forest species and protecting existing mangroves in the Molo Boulevard and Baluarte areas.

Louie Sebastian Miranda, Globe Regional Sales Head, stressed that the regional teams covering Iloilo City and Panay are fully on-board with the program. “We will sufficiently allocate volunteers to plant and take care of these mangrove projects. The teams will ensure that efforts are continuous and Globe’s conservation program will be more sustainable in the long run,” he said.

To push its sustainability agenda, Globe inked a five-year agreement with ZSL Philippines to protect and rehabilitate local mangrove forests, which are being threatened by the conversion of vast areas into ponds for commercial fish and shrimp farming. ZSL Philippines is one of the primary organizations focused on mangrove rehabilitation through abandoned fishpond reversion, green-gray technology intervention, and close collaboration with People’s Organizations (POs).

In June 2021, Globe became the first and only Philippine company listed by the Science-Based Target initiative (SBTi) to commit to Business Ambition for 1.5°C and has officially joined as a participant of the Race to Zero.

Globe strongly supports the United Nations Sustainable Development Goals, particularly UN SDG No. 13, which underscores the importance of urgent climate action to save lives and livelihoods and to address climate emergencies, and UN SDG No. 15, which promotes the protection, restoration, and sustainable use of terrestrial ecosystems. Globe is committed to upholding the UN Global Compact principles and contributing to 10 UN SDGs.