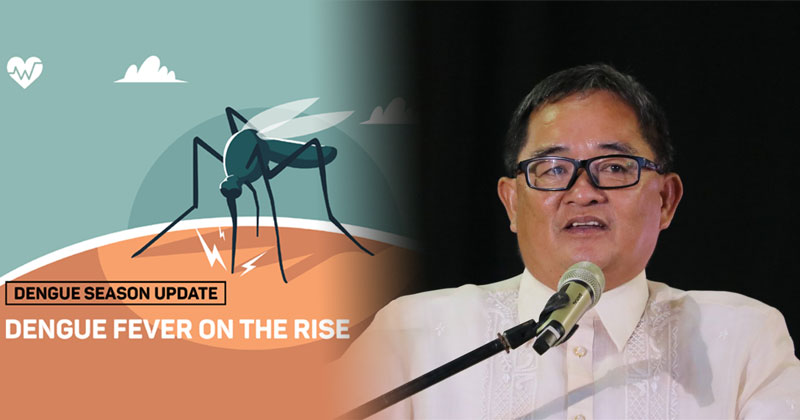 The Province of Guimaras has declared an outbreak of Dengue Hemorrhagic Fever.

Governor Samuel T. Gumarin signed Executive Order No. 36 on July 12, 2019, declaring an outbreak of the Aedes-borne disease in the island.

The rise of dengue cases to 493 with two deaths from January to July 6, 2019, prompted the Local Chief Executive to take action.

Guimaras recorded a 1,046.5 percent increase of dengue cases from January to July 6 of this year, compared to the same period last year.

Dengue cases in the island recorded this 2019 has exceeded the epidemic threshold based on the data of the Provincial Health Office Epidemiology and Surveillance Unit.

The Municipality of Jordan recorded the highest number of cases with 153 while the town of Buenavista has 109.

Ninety three (93) cases were reported in Nueva Valencia, 72 in Sibunag and 66 in San Lorenzo.

Twenty one (21) barangays were identified to have clustering of dengue cases where three or more dengue victims were recorded in each barangay.

Along with the declaration of dengue outbreak, Gumarin ordered the creation of the Dengue Crisis Management Task Force to spearhead the response of the Provincial Government of Guimaras to suppress the rise of dengue cases.

The governor also ordered all barangays of the province to strengthen their clean-up drive in the community to destroy the breeding places of the mosquito carrying the dengue virus.

Further, barangays were also advised to strictly adhere to the 4 O’Clock Habit that mobilizes communities to search and destroy mosquito-breeding places.

The PGG also heightened its blood donation drive to ensure enough supply of blood in the province amidst the rise of dengue cases. (PIO Guimaras)