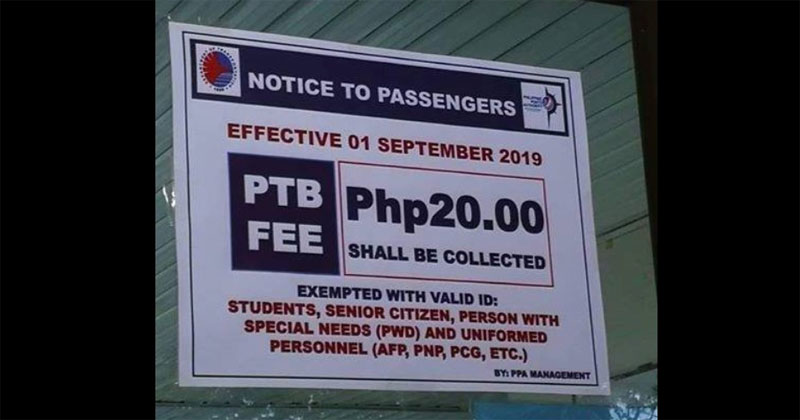 Gumarin said that the province is still having major socio-economic challenges after the recent maritime tragedy.

“The Province of Guimaras continues to confront head-on the aftermath of the August 3, 2019 Sea Tragedy more apparently on the transportation sector which still has massive impacts on the daily routine of the riding public, gravely affecting education, employment, livelihood and public convenience, among others,” he said.

Gumarin appreciates the support and assistance extended since the said tragedy and exemption given to students, senior citizens, persons with special needs and uniformed personnel.

“We are appalled with the effects of your office’s advisory (as publicly posted and announced) to Guimaras-bound passengers on the imposition of PTB Fee in the amount of 20.00 PhP effective September 1, 2019 as majority of the passengers are workers and laborers who could hardly suffice their daily needs and have to muddle through the city of Iloilo for income,” Gumarin said.

Meanwhile, Vice Governor John Edward G. Gando shared the same sentiment and sent his appeal to the PPA for the same purpose.

“My office is deluged with appeals from our constituents relative to your (PPA’s) advisory to the Guimaras-bound passengers on the imposition of PTB Fee in the amount of P 20.00 effective September 1, 2019,” Gando said.

Gando cited that Guimaras economy is still under recovery after the tragedy.

“As we are still on the process of coping from the August 03, 2019 tragedy and its adverse impacts to the lives and economy of our people, we are appealing to your (PPA) kind gesture and sense of justice for the reconsideration and waiver of the terminal fee as not to further burden our people and Province.

The notable influx of passengers in Iloilo Terminal is one of the visible effects of the conditions set out by the Maritime Industry Authority (MARINA) in the lifting of the CPC of motorbancas plying the Iloilo-Guimaras route and vice versa. (Photo by Danna Mercine)