The Iloilo City Government is coordinating with the Commission on Higher Education (CHED) Regional Office 6 for the allocation of additional beneficiaries of Uswag scholarship program.

Mayor Jerry P. Treñas continues to support more scholars through an educational endeavor he initiated when he was congressman since 2010.

The initiative has helped thousands of indigent city residents as recipients who availed of scholarships for deserving students to finish college despite poverty.

A total of 660 new freshmen scholars who are taking bachelor’s degree courses in various public and private universities here were already approved for the educational assistance. They need to maintain a passing general weighted average.

Janeo said she made it through the help of Uswag scholarship despite their family being financially unstable. She shared that while they lost their father, her mother was able to make both ends meet because her school expenses and allowance were covered by the scholarship grant she received.

Janeo advised underprivileged students to persevere and be dedicated to their studies as the scholarship provides a lot of opportunities for them to become professionals someday.

A total of 1,491 scholars who are now on their second to fifth year in college also renewed their scholarships.

The scholars will be receiving P7,500 per semester each, an increase from last year’s P6,000 per semester. (Iloilo City PIO | Photos by Ruel Bautista Patnubay) 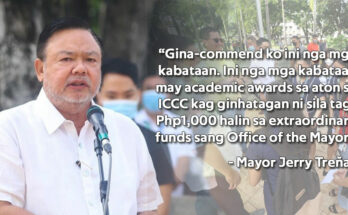