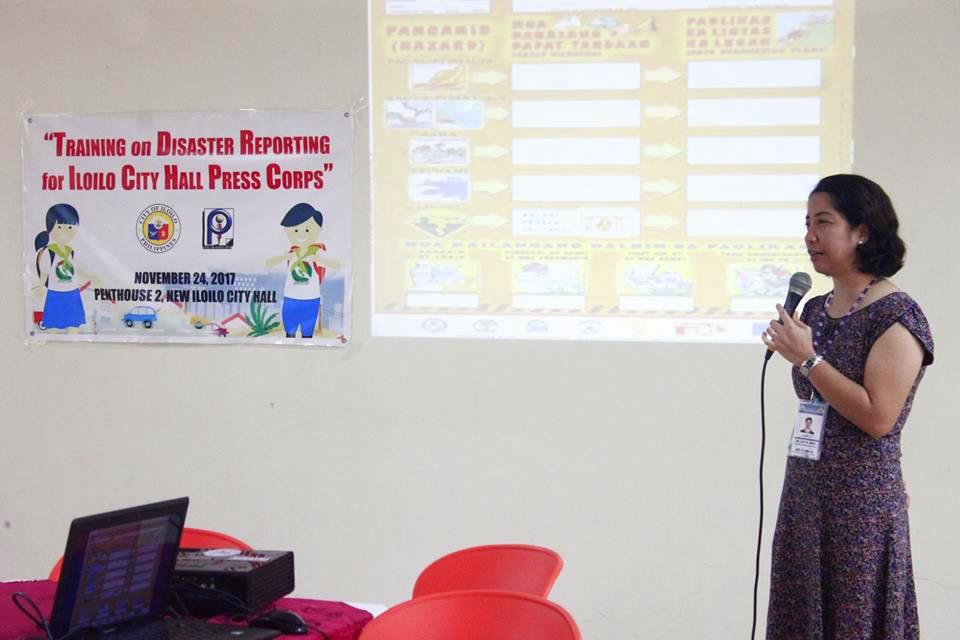 The initiative was organized by the City Government through the Public Information Office (PIO) in partnership with the City Disaster Risk Reduction and Management Office (CDRRMO).

“We hope to train our media partners on how to report disasters for the interest of our public for them to let the people also understand the risks involved,” said Mayor Jose Espinosa III.

Espinosa added that media practitioners should not only focus their attention to get City Hall stories, but they should also equip themselves with skills in disaster reporting.

Jessica Dator-Bercilla, senior advocacy and policy officer for Asia and the Middle East of Christian Aid and one of the training speakers, stressed the importance of knowing what risk means.

“The members of the media need to understand first and foremost what risk means and what does it constitutes. Because if they know this better, they can easily explain to the public the hazards, the level of exposure of the public to these hazards and what are their vulnerabilities against the hazard,” said Bercilla.

The training further aimed to educate the media on how to report disasters without risking their lives during coverage.

“The value of this training is also to ensure that not only media practitioners are able to contribute to the betterment of understanding of risk that would save a lot of lives but also encourage people to build their capacities against disasters,” Bercilla added.

“We need ‘live reporters’, not dead ones,” she stressed.

The training was in response to the Sendai Framework for Disaster Risk Reduction which distinguishes that the State has the primary role to reduce disaster risk and that the responsibility should be shared with other stakeholders including local government, private sector and other stakeholders.

“Part of the reasons why disasters happened just like Typhoon Yolanda was because a lot of people did not know what risks mean. Meaning, it is either they do not know what hazard is or that they did not know their exposure to hazards and their vulnerabilities. When you put all these together, the hazard, exposure and vulnerability, that creates risk. If you do not appreciate the relationship of these three, you are really prone to risk,” said Bercilla.

Bercilla encouraged the public to understand what disaster is through the media.

“Give the media a chance to explain what is happening and try to understand and build lines of communication so you would understand what risks are,” Bercilla said.

Participants also went through a workshop on how to keep safe and survive during disaster coverage facilitated by CDRRMO head Donna Magno.