The Iloilo City government gave recognition to 10 establishments in the metropolis that are considered Person with Disabilities (PWD)- friendly during the City Hall flag raising ceremony on Monday, July 24. 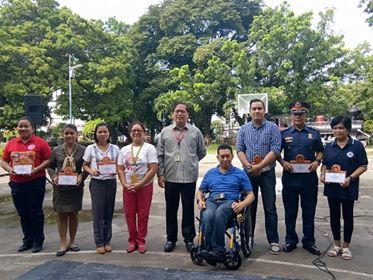 The recognition was in line with the celebration of 39th National Disability Prevention and Rehabilitation Week from July 17 to 23.
Mabilog called for the public to extend kindness and love to the PWDs.

“We are appealing to everyone to extend their kindness and love to PWDs especially that we live normal lives. Instead of making fun of them, let us help and guide them because that is what a good public servant and a good Christian must be,” said Mabilog.

The PWD-friendly establishments were recognized for their compliance with Accessibility Law or Batas Pambansa (BP) Bilang 344 or An Act to Enhance the Mobility of Disabled Persons by Requiring Certain Buildings, Institutions, Establishments and Public Utilities to Install Facilities and Other Devices.

Meanwhile, Federation of Persons with Disability Associations in Iloilo City (FPDAIC) Inc. president Mark Espesor said the recognition given by the City Government to 10 PWD-friendly establishments is a manifestation of clear collaboration of the government, business, private sectors and line agencies in giving importance to PWDs.

“This simply shows that we are living in one community as people and citizens of this city with respect and dignity towards each other,” said Espesor.

“May this 39th National Disability Prevention and Rehabilitation Week be able to communicate to every one of us that we are not ‘differently-abled’, but we are ‘able’ as long as we learn to understand and support each other,” Espesor further stressed. [via Iloilo City PIO]