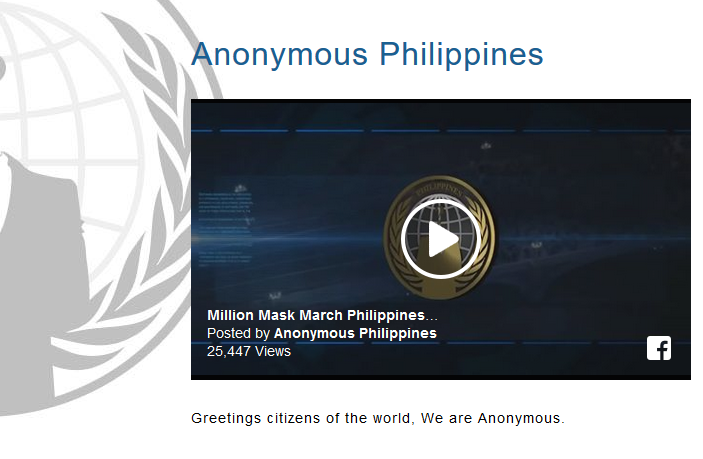 The hackers posted a video about their advocacy dubbed as Million Mask March Philippines 2015, with the following messages:

“The government is like a corrupted computer system which is prone to bugs and crashes, and a corrupt operating system should be reformatted.

“Stand up for what is right, stand up and let your voice be heard. Stop being deaf and blind when the very existence of your humanity is being stepped on by the one whom you entrusted to carry our nation. There is no reason a select few can acquire so much, while the majority suffers from poverty because of corruption. We have the power to make a change, that power is being withheld by the people at the pedestal. But we, as a collective has the capability to destroy that very pedestal and change the course of our nation.

“The time has come to once again to show the world that we, the people, care about the issues surrounding our beloved country. On November 5, 2015, we invite you to march peacefully with us towards change. Because sitting and doing nothing will get you nowhere.”

Anonymous PH also took down 88 other government websites, and the Twitter account of Maine Mendoza of AlDub loveteam.