Public Service Employment Office (PESO) of Iloilo Province was once again declared as the best nationwide after winning the 2017 Search for Best PESO. 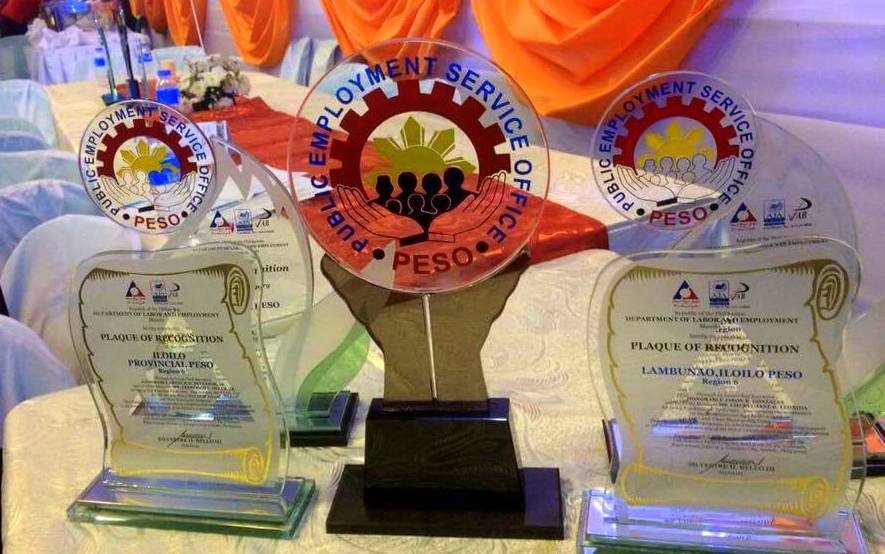 PESO Iloilo Province, headed by Francisco Heler, Jr., received the award for the second year in a row at the National PESO Congress Awarding Night of the Search for Best PESO at Cauyan, Isabela on October 4, 2017. This year’s theme is “Trabaho Negosyo at Kabuhayan: Matatag na PESO, Kaagapay ng Bawat Pilipino.”

Last year it was also recognized as the National Best Peso under the first class province category during the 16th National PESO Congress held in Cebu City.

PESO Iloilo was formerly attached with the Human Resource and Development Office (HRMDO) of the provincial government. Last October 2015, Governor Arthur Defensor approved Provincial Ordinance No. 2015-122 establishing the PESO as a separate office of the Iloilo Provincial Government to further improve its functions and services. It is tasked to ensure the prompt, timely and efficient delivery of employment service and provision of information on other DOLE programs.

“This office is as important as the other front-line offices. It is responsible for job facilitation and other services that can contribute to the empowerment of our people,” said Defensor.

Among the programs and activities being undertaken by the PESO Iloilo are: Job fairs, Livelihood and self-employment bazaars, Special Program for Employment of Students and Out-of-School Youth, Special Recruitment Activity, Electronic Manpower and Skills Registry System, and other programs/activities developed by the DOLE for special groups of disadvantaged workers such as persons with disabilities (PWDs) and displaced workers.

PESO Iloilo is also piloting the JobStart Philippines program, youth employment facilitation program of DOLE in partnership with the Asian Development Bank and Government of Canada which aims to enhance the employability of at-risk youth to improve their integration into productive employment.

The “Search for Best PESO” is an annual activity that recognizes the important contribution and exceptional accomplishment of the Public Employment Service Offices in the deployment of DOLE-initiated employment facilitation programs.

It likewise serves as a way to acknowledge the exemplary performance of the PESO as a labor market information hub, and provider of employment services such as job referral and placements, career guidance and employment coaching to the intended clients.

It covers all existing PESO such as LGU-based, NGO-based, Educational Institutions and Community-based Organizations provided that they are operational and active for a period of at least one year prior to nomination to ensure continuance of service.

Congratulations PESO Iloilo Province for winning this year’s search and exemplary performance in the delivery of employment programs of the government! [Photo by Jayrel Javier Encontro]