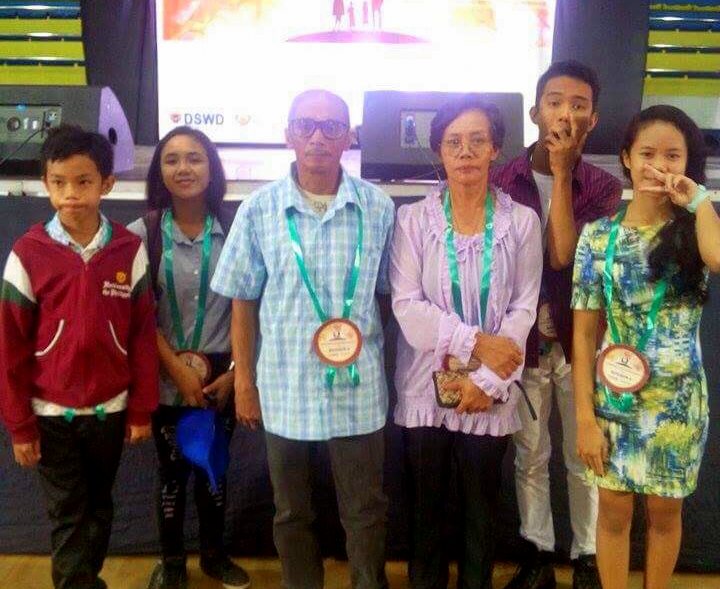 The Cabualan couple – Romulo and Remia– who are both rebel returnees turned advocates of peace and development, together with their six children were given the model family award in the National Awarding of Search for Huwarang Pantawid Pamilya 2017 during the National Family Week Celebration at Muntinlupa Sports Complex, Muntinlupa City on Sunday, October 1, 2017.

The inspiring story of the Cabualan family started when the couple met as rebels in the underground movement in 1984. The cruelty, brutality and injustices they experienced under the Marcos dictatorship pushed them to voluntarily join the New People’s Army (NPA). They referred themselves as members of the Kilusan.

But there was no greater weapon than love when the two fell in love with each other and decided to surrender to the government so they could start in building a family of their own and to live a peaceful life, far from the atrocities that they have seen.

After eight years of hiding, running and eluding arrest from the military, the two surrendered in 1992. Their respective families welcomed them back home. Then, they opted to stay in Leon particularly in the place of Romulo.

In 1995, both were given amnesty by the government to start a new life. They were placed under community integration. At first, they felt the community’s suspicious of them since they knew that they were both former rebels. However, they were gradually accepted when the community realized that they were sincere in wanting to go back to the government’s fold. The religious community welcomed them also without any judgment and they became active members of the church. Two years later, the couple asked God’s blessings for their marriage. They were blessed with six children.

They then felt secure due to different support and livelihood opportunities given by the government, church, and non-government organizations. The couple together with the other returnees were placed under BALIKATAN program of the Armed Forces of the Philippines (AFP). Later, they were formed into a Balikatan Organization. Through the said organization, the couple availed of one carabao from the Department of Agriculture (DA) and a livelihood capital of P10, 000 cash which they bought hog for fattening.

Later they converted their livelihood into vermicast after a priest friend from Don Bosco School in Dumangas, Iloilo taught them how to do it. Also, their organization through their cooperative, has been recipient of the ABS-CBN foundation livelihood project. They were given seed capital for their mango business but years after the death of their founder Jimmy Calumno, also a rebel returnee, their organization was then dissolved.

The government’s assistance and interventions, however, did not just end there. The couple particularly Remia was also one of the proponents of “Binhi sang Buas Damlag,” a peace and development project of the Office of the Presidential Adviser on the Peace Process (OPAPP) through the UP Visayas Foundation Inc. (UPVFI) as funded by the United Nations Development Programme (UNDP) where they were taught more on community organizing. Grupo Paghidaet was then organized by the University where Remia was among the original members. The group is a local volunteer organization whose mission is to be an agent for promoting peace and development. The Commission on Human Rights 6 (CHR-6) also helps and works with them in advocating peace and development, human rights and community empowerment.

From then on, the couple regained the trust and confidence of the government and started advocating on peace and development. In 2001, Remia replaced her husband Romulo as tanod member after the latter suffered from a nervous breakdown. She was then chosen as Tanod Commander by their Punong Barangay and voluntarily served to maintain the peace and order situation in their barangay.

In 2011, the family also became a beneficiary of Pantawid Pamilyang Pilipino Program covering three of their six children. Remia was chosen as a Parent Leader when the program started after her fellow members trusted her capacity to lead. Remia is making sure that all household members under her care are religiously following all the conditions set by the program, particularly on health and education of their children as well as maintaining backyard gardening to complement the additional rice subsidy given by the government.

Aside from cash grants they are receiving from the program, Remia and her husband accepted the jobs that were offered to them to work as contractual laborers under the Trabahong Lansangan – a joint program of DSWD and the Department of Public Works and Highway (DPWH) through a private contractor, the International Builders Corp. (IBC,) just to sustain the school needs of their children. Remia is a timekeeper assigned in Leon while Romulo is a construction worker assigned in Iloilo City.

Finally, all their hardships paid off when two of the couple’s children graduated from college, one is in third year college while the three others are in high school.

According to the couple, the program is a great help to their family especially in keeping their children in school and keeping them heathy. They added that the program also helped them boost their self-esteem and continue their advocacy as a catalyst of change through peace and development.

The couple is striving hard to make their life as stable as they wanted it to be despite both of them not having a regular income. They could not even repair their old house because they give more importance to education of their children so that what they have hardly and painfully experienced before will not be encountered by their children.

As parents, they do not want also their children to follow their footsteps, once being at the underground movement, however, they emphasized the value of principles, respect, forgiveness, and love because for them these are the essential weapons to achieve PEACE.

A family who inspires other members of the community.

The Cabualan couple is truly an inspiration to all especially to those in underground movement. Their braveness in returning to the mainstream of democratic society where they chose to live a peaceful life has inspired more other rebels to surrender. In fact, at least 20 of their comrades also surrendered after the couple’s submission to military. Presently, three of these rebel returnees are now elected as barangay officials in their respective areas.

Since LOVE has been the greatest weapon of their surrender, the family has a strong tie which is very transparent to their community that could inspire their other co-beneficiaries despite of their poor status in life. Despite being financially unstable, the couple value the education of their children and worked hard to send their six children at school. Through the 4Ps, their burden in sending their children at school has been lessen but the couple continue to work even harder under the scorching heat and dusty roads to earn their living.

The couple is thankful that their children are all studious, strongly determined and truly value the importance of education, opportunities knock at their door when their children availed the different scholarship programs offered by the government to poor but deserving students.

The family is very thankful to be a beneficiary of the program because they became an empowered individuals ready to face an empowered society that are susceptible of any changes. For them the Pantawid Pamilya as well as the different government programs, services and assistance they availed from the government helped them raise the level of their well-being.

Amidst difficult situation, the couple is more motivated to prioritize their children’s education for them to finish college and get better jobs. The couple said education is the only wealth they could give to their children to make sure that they have better future ahead.

The Cabualan family is indeed a living testimony who could prove the gains and impact of the program to their lives. The program might be temporary only since “Walang Forever sa 4Ps” but the Cabualan has shown to us how they value the opportunities given to them by the government because for them “Walang Forever na Kahirapan. [via DSWD Western Visayas]