Iloilo City was officially named as one of the sites for two important Ministerial Meetings of the Asia Pacific Economic Cooperation (APEC) in 2015 out of six regions in the country.

A communication from the Office of the President through Director General Marciano A. Paynor Jr. detailed the hosting of Iloilo City on September 21-25, 2015 the SME Ministerial Meeting with 700 delegates, and on September 28 to October 6, 2015 the Food Security Week, a high level policy dialogue on Food Security and the Blue Economy and related meetings with 900 delegates. 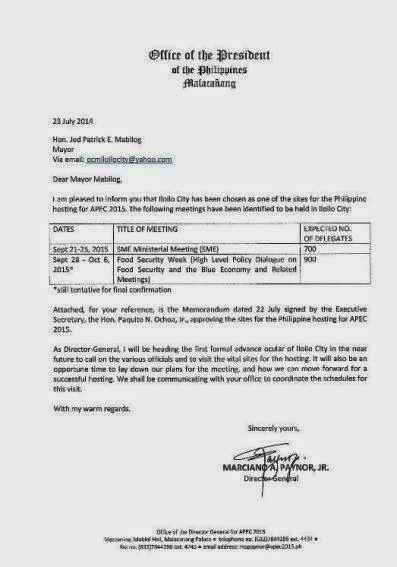 Mabilog said that Paynor will head the formal advance ocular inspection of Iloilo City soon and to visit the vital sites for the hosting. It will also be an opportune time to lay down the plans for the meeting ad how to move forward for a successful hosting.

Construction is ongoing for the P700 million state-of-art Iloilo Convention Center as site of APEC meetings. Constructed in a 1.7 hectare area inside the 54 hectare property of Megaworld Corp at the old Iloilo airport in Mandurriao district, the convention center will showcase the Dinagyang and Paraw festivals of the city.
The city chief executive said he is mobilizing the Iloilo Organizing Committee and other working committees to prepare an itinerary for the delegates to see places in the city and in the province of Iloilo augmented by cultural performances.

Among the city places to see are the Iloilo River, Esplanade, diversion road, among others, while the province boasts of its cultural heritage Miagao Church and the scenic islets in northern Iloilo, among others. By Lydia Pendon.