University of the Philippines in the Visayas graduate Froilene Villanueva is representing Iloilo in the 2014 Mutya ng Pilipinas beauty pageant in Manila. 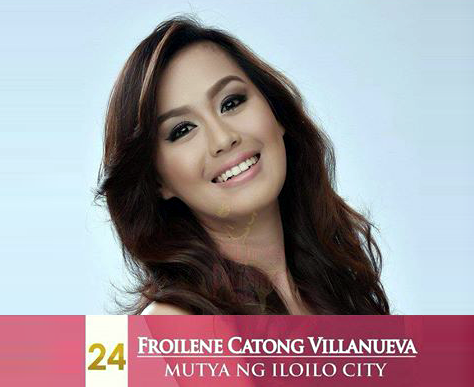 Villanueva, a Bachelor of Arts in Communication and Media Studies graduate of UPV, bested 6 other Ilongga beauties in the Mutya ng Pilipinas – Iloilo last May 16 to be one of 30 finalists of the pageant.

The 21-year-old model and product endorser was also a 2nd runner up of Miss Iloilo Dinagyang 2013 and a former Lin-ay kang San Jose de Buenavista winner in 2012.

Wearing no. 24, Villanueva hopes to upstage other the aspirants from different regions of the country and Filipino communities abroad in the grand coronation night which will be on August 8, 2014. The winner will bring the country’s colors in Miss Tourism International pageant in Malaysia.

Mutya ng Pilipinas President Jacqueline Tan emphasized that ‘this is the only pageant that truly promotes the beauty of the Philippines.”

“She will tour the country’s different tourist destinations because she will promote the Philippines to other nations,” Tan added.

Aside from the major awards, Mutya organizers has also put up a People’s Choice contest online. You may help vote for Froilene Villanueva through this link: http://mutyapilipinas.com/vote-your-mutya-ng-pilipinas/