In celebration of its 78th year anniversary, global brand Krispy Kreme Doughnuts is offering a box of 6 Original Glazed doughnuts for only Php 78.00 nationwide! 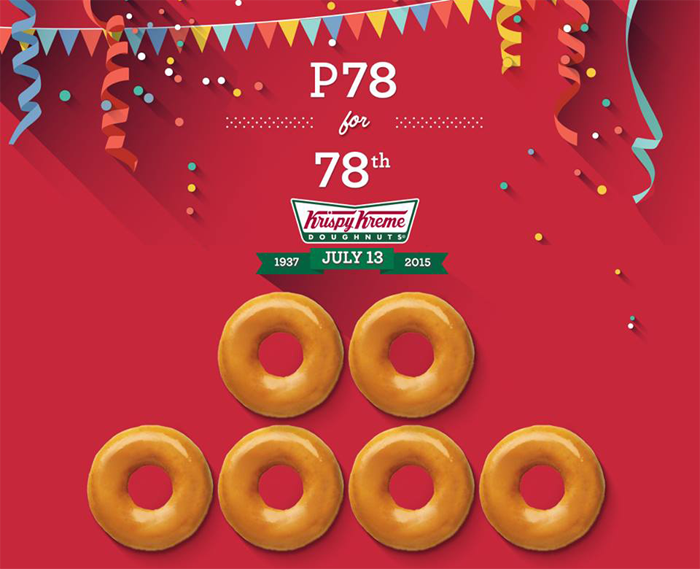 In a meetup with Iloilo Bloggers on Friday, the brand behind the famous “Joy in a Box” tagline announced its biggest and sweetest, one-of-a-kind treat to celebrate its anniversary. The 6-for-P78 promo is valid from 10am to 8pm on July 13, 2015 at their Hotlight Store in SM City Iloilo.

To avail of the promo, Krispy Kreme lovers simply need to download and register in the Krispy Kreme Mobil App and show their digital coupon at any participating store. Customers may also print or screen grab the 78th Birthday Celebration voucher from Krispy Kreme’s official Facebook, Twitter or Instagram page and present the image at the store to redeem box of 6 mouth-watering Original Glazed doughnuts. Here’s the complete mechanics:

“For the past 78 years, Krispy Kreme has shared in the fun and unforgettable memories of its customers. Krispy Kreme is a witness to the countless smiles and laughter, conversations and celebrations of every Krispy Kreme enthusiast all over the world. Today, it seeks to give back the joy to all its customers, as a way of thanking everyone for being part of Krispy Kreme’s wonderful story of delightig people,” said Krispy Kreme PH Marketing Manager Ariane M. Valinton.

Krispy Kreme Iloilo is the 59th of the 63 stores all over the Philippines today, and the brand is keen on expanding its presence in the country.