President Rodrigo Duterte delivers his first State of the Nation Address (SONA) in a joint session of Congress in Batasang Pambansa on July 25, 2016. 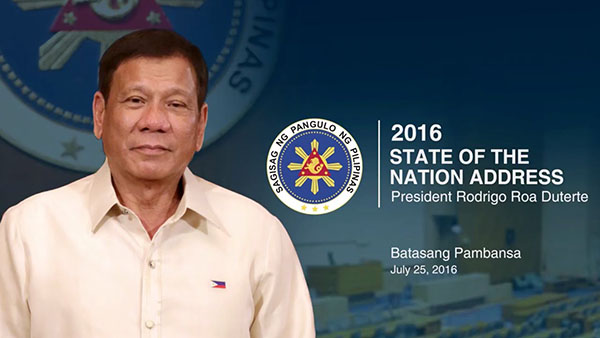 Check the Livestream and replay video of full address below:

Malacanan earlier mentioned it wanted to center on the President’s message to the people.

Presidential Communications Office Secretary Martin Andanar underscored, “It is a very powerful speech personally written by the President that will awaken the patriot in every Filipino.”

Acclaimed director Brillante Mendoza has been tapped to direct the event, pro bono.

For their part, militants from the Left have vowed not to march in protest as their tradition, but in support of the new President. Expected to join them are a thousand delegates, including the lumad from Northern Mindanao and Caraga.