The Iloilo City Government continues to address the condition of children in an effort to deliver the best services for a brighter future of the young sector. 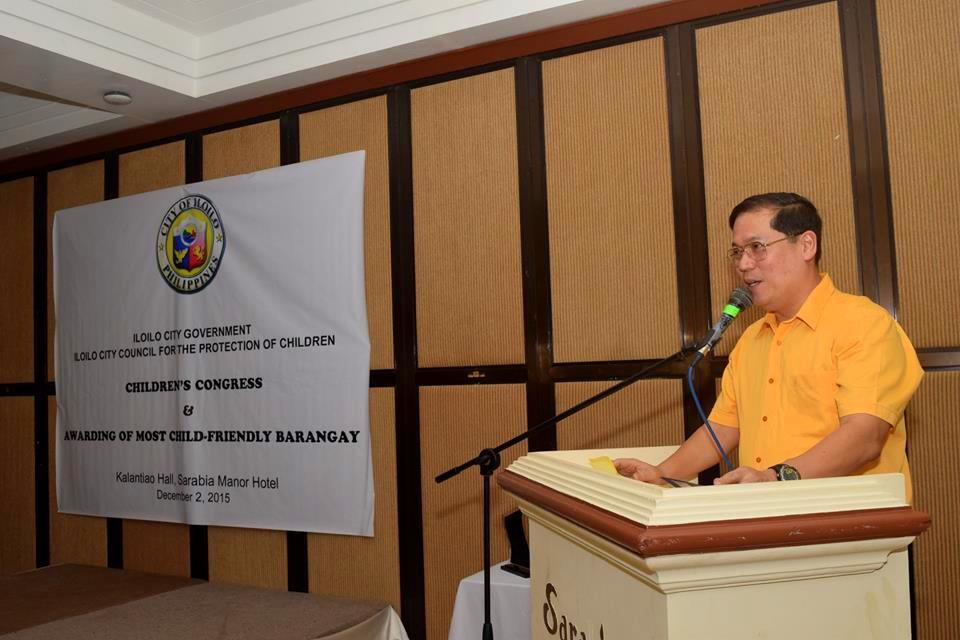 In his State of the Children’s Report delivered during the Children’s Congress at Sarabia Hotel Dec. 2, Mayor Jed Patrick E. Mabilog highlighted the accomplishments to promote and protect the rights and welfare of the youngsters in the city.

“We are ensuring that the survival, development, participation and protection rights of children are upheld and respected. This has led to much improved situation and well-being of our children,” stressed Mabilog.

He noted the City Hall’s “Womb to Tomb” initiatives in providing the much-needed services starting from the young generation.
The mayor said the City Health Office, Maternity and Lying-in Clinics and district health centers exert extra effort to ensure that children are fully immunized against TB, diphtheria, pertussis, tetanus, polio, measles and Hepatitis B recording 78 percent of the target.

They are also given one dose of Vitamin A starting at 6 to 11 months and 1 to 5 years old twice a year hitting a high 96 percent.
Mabilog encouraged Barangay Health Workers and Barangay Nutrition Scholars to promote the use of malunggay for iron supplement in nutrition needs.

Pregnant women get at least four complete pre-natal check-ups and immunized against tetanus and lactating mothers are given sufficient doses of Vitamin A and iron.

Observing many infants in his regular barangay visits, he advised that pregnancies should be spaced at least two years apart relative to responsible parenthood.

A total of 200 daycare centers are now operating which are more than the 180 barangays to cater to the growing needs of 10,805 enrolled daycare children age 3 to 4 years old.

Mabilog said the daycare has monthly activities which are social preparation for children to bring out their best potentials, confidence and leadership skills.

He added that the Huwaran nga Anak award of the Task Force on Street Children showcased the struggles and victories of the less-privileged who became models and inspiration for others to follow.

The Dalayunan Home for Boys and Crisis Intervention Unit (CIU) serve the needs of children in difficult circumstances and help them back to mainstream society.

“We are the only local government unit in the country that gives social pension for 1,000 persons with disabilities and 5,000 senior citizens. There are 450 PWD children included in giving out of P500 social pension every December and May for two years now,” said Mabilog.

Meanwhile, the Outstanding Student Leaders of Iloilo City (TOSLIC) recognized the youth’s contribution to the community while the Boys and Girls Week in partnership with Rotary Club of Iloilo City has given high school students the opportunity to practice their leadership skills and participate in decision-making during their one week stint as officials of City Hall.

Mabilog thanked partners, stakeholders and Iloilo City Local Council for the Protection of Children for the successful programs and projects implemented through the years.