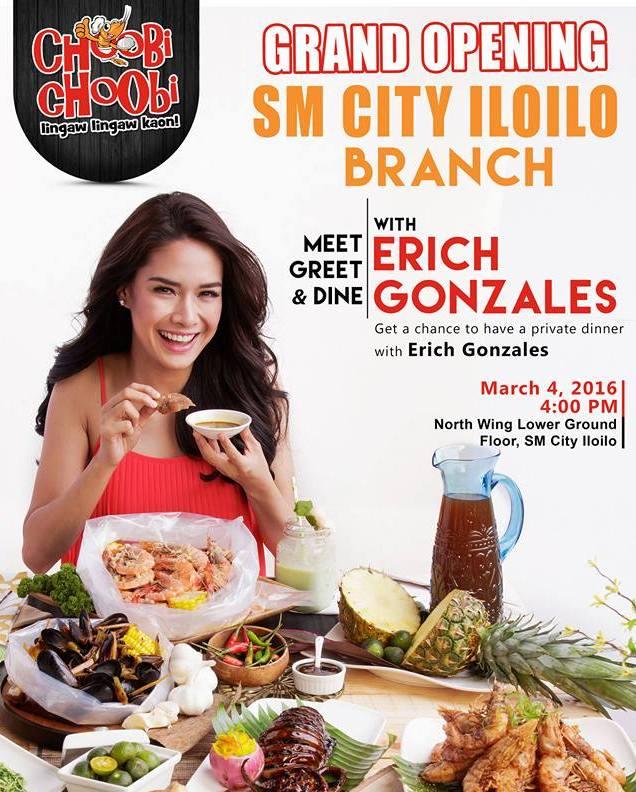 Choobi Choobi, a family restaurant located at lower ground floor, north wing expansion of region’s biggest mall, will be having a grand opening at 4:00PM of the said date. They will bring in the Kapamilya star to lead the ribbon-cutting, and have a fun time with her Ilonggo fans.

Choobi Choobi also has an ongoing promo where four winners and their selected friends will get a chance to have a private dinner with Gonzales. Here’s the mechanics:
1. Every P500 single food bill entitles the customer to 1 raffle ticket.
2. Four winners will be drawn for the Grand Prize of having a private dinner with Erich Gonzales.
3. Each winner can bring 1 friend to a private dinner on March 4, 2016.
4. There will also be consolation prizes. Each winner will receive a P500 gift certificate for the restaurant.
5. Promo period will be from February 17 to March 3, 2016.
6. Draw date will be on March 3, 2016.

Hurry, troop to Choobi Choobi at SM City Iloilo now, and get a chance to win dinner seats for you and your friend, with the beautiful Erich Gonzales!

Choobi Choobi is a homegrown casual dining restaurant from Cebu which offers Filipino comfort food in their menu.

House specialties are their various shrimp dishes such as “Shrimp in a Bag”, a pound of shrimp cooked in different ways and served in a bag, and the signature dish “Stan’s Fried Black Pepper Shrimp“, succulent prawns deep fried with a special crispy batter topped with special Choobi Choobi Sauce.

They also serve a wide variety of seafood other than shrimps such as squid, shellfish and fish. Also available are mouthwatering Lobster Fish (Monkfish), Giant Bamboo Clam and Baby Lobsters (Scampi) dishes!

Choobi Choobi derived its name from Fookien word which means “to enjoy” or “have fun”, hence their tagline, “Lingaw Lingaw Kaon!”.