Global Business Power Corp. (GBPC) turned over a check worth P2 million to the city government here for the rehabilitation and improvement of an existing lawn tennis court at the La Paz plaza. 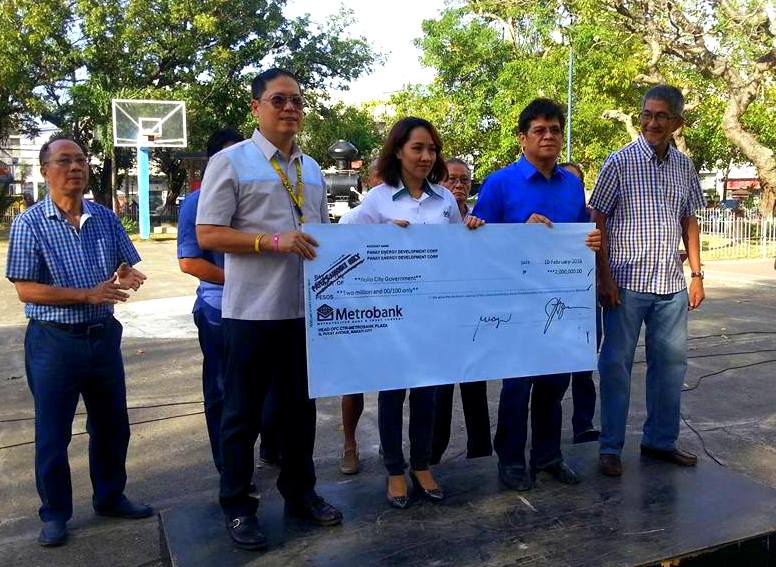 After the regular flag raising ceremony held Monday morning, city mayor Jed Patrick Mabilog received the check from Maira Montelijao of GBPC as a symbol of solid partnership between the city government and the power firm in improving the public tennis court patronized by sports enthusiasts.

La Paz Plaza and its more than three hectare area is dedicated to sports development.

Aside from the lawn tennis the plaza also serves as venue for football competitions, boxing, basketball, softball and baseball, mixed martial arts, arnis and badminton.

A memorandum of agreement (MOA) was signed last December 15, 2015 between Mabilog, GBPC executive vice president Jaime Azurin and Panay vice president Petronilo Madrid for the assistance to rehab the only public tennis court in the city.

Mabilog was very thankful to the power firm in recognizing the potentials of the city’s local sports development program.

Aside from the tennis court, the firm which owns Panay Energy Development Corporation (PEDC) that developed the first coal-fired power plant in Western Visayas, and the diesel-fueled Panay Power Corporation (PPC), is also instrumental in lighting the lives of the Ilonggos, especially city residents.

Through its corporate social responsibility, the firm had adopted an initial eight barangays surrounding its power plants in Brgy Ingore, La Paz by providing employment and scholarships to the children.

So far, the power firm has already adopted 20 barangays in the city in terms of infrastructure and health support. [via PNA]