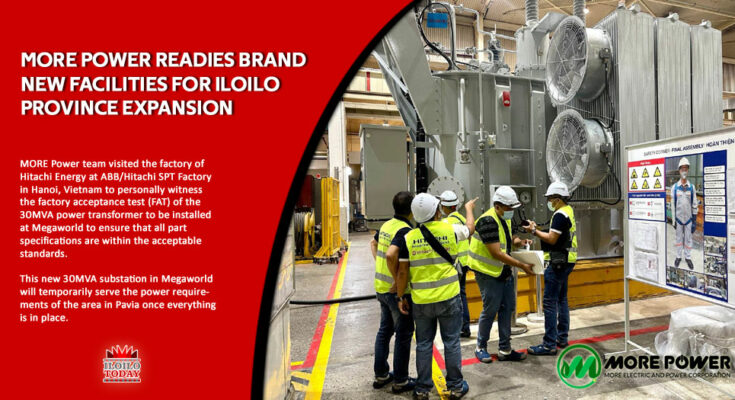 This was revealed by the private distribution utility of Iloilo City after the amended bill of their franchise lapsed into law last July 30.

In the Power Utilities round table discussion initiated by the Iloilo Local Economic Development and Investment Promotion (LEDIP) yesterday, MORE Power President and Chief Executive Officer Roel Castro said that the company is very much prepared. It has already put up primary lines along the boundaries of Pavia and Iloilo City.

A new 30MVA substation in Megaworld in Mandurriao district is in the works, which will temporarily serve the power requirements of the area in Pavia once everything is in place.

MORE Power has purchased the necessary equipment and materials which will initially be used in outlining the service areas. Likewise, the company already hired additional personnel to perform the tasks.

The distribution utility estimates around 5 years before they will be able to finish the entire scope of work for the 15 towns and Passi City.

The power distribution utility company is just waiting for the official communication coming from Congress and Malacañang on the effectivity of the law.

There will be no take-over. Instead, Iloilo Electric Cooperatives will still be operating in these areas.

According to Castro, this is very beneficial for the consumers because they will be given a choice of who they want to provide them with a quality and better service.

MORE Power is open to discussions with the ILECOs on possible partnerships and collaboration for the benefit of the consumers.

“Mag reach out kami sa ila. There’s a way that we can cooperate for the convenience sang consumers kag indi sila mabutang sa alang-alang”, according to the President of MORE Power.

As the expansion now becomes a law and the economy is gradually returning to normal thus requiring additional capacities from the distribution utility to serve the growing demand of the City. MORE Power fast-tracked the construction of the new and state-of-the-art substation at the Iloilo Business Park.

“The substation will not only improve the distribution system but also add more loading capacity in the city of Iloilo and for the initial requirement of Pavia”, Roel Castro said.

He also added, “This substation will be equipped with modern machinery and equipment adapting to the newest technology in the market today, and one of those is the 30/36 MegaVolt Amperes (MVA) ABB/Hitachi Power Transformer.”

Last June 30 to July 4, 2022, the MORE Power team visited the factory of Hitachi Energy at ABB/Hitachi SPT Factory in Hanoi, Vietnam to personally witness the factory acceptance test (FAT) to ensure that all transformer’s part specifications are within the acceptable standards. All equipment spare parts were also secured and will be included in the shipment as part of the specified agreement in the contract.

Unlike the conventional transformers, which use silica gel to dehydrate the conservator and tap changer tanks from moisture, this self-dehydrating equipment will continuously secure these tanks and you need not worry about site inspections and silica gel replacements. It is also equipped with a digital interface for easy connection to smart grid applications and can be integrated into a system through a central control unit.

Furthermore, MORE Power added an online Dissolve Gas Analyzer (DGA) for all gases. During operation, gases are formed within the power transformer as a by-product of chemical reactions. These gases are analyzed and can be translated into the actual condition of the transformers. Oil samples are typically extracted from power transformers and sent to a chemical laboratory for testing and analysis, which can take weeks. But with the online DGA, gases are analyzed, translated, and monitored in real-time. Having this advantage, you can monitor the actual condition and life expectancy of the power transformer, thus preventing long and unscheduled outages in the future.

The 30/36MVA Power Transformer is expected to arrive in Iloilo City this August and is expected to be energized in the last quarter of this year in time for the peak season and implementation of Phase 1 of the expansion.