Do you have moles, warts, skin tags or other skin outgrowths? RCC Amazing Touch offers effective removal of those using their patented Herbal Cautery treatment. 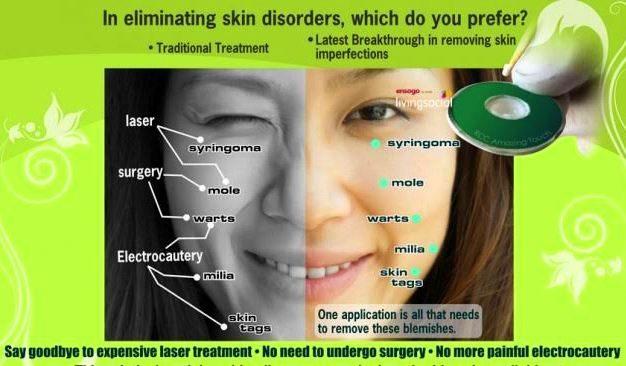 Did you know that even how good you take care of yourself, you are still susceptible to develop warts? Warts are caused by a certain strain of human papillomavirus (HPV) and anyone can get warts. Even children and teens can get warts. Although warts in children disappear after some time, some can thrive up to their adult years. And if the wart is located on the face or other visible areas, it can cause embarrassment and inadvertently lowers a person’s self esteem.

“If you have a weakened immune system, you are more susceptible to develop warts,” adds Richard B. Dela Cruz, President of RCC Amazing Touch International, Inc. (RCCAT). According to him, warts are contagious that it can spread from one person to the other through touch or skin contact. He explains that warts can even spread by the mere use of towels that are exposed to warts.

He further explains that touching a door handle infected with HPV can also spread warts. A cut or a scrape can even become an entry point for HPV that causes warts. “Every person develops warts many times in their lifetime. So even though you have removed warts now, it doesn’t mean that you wouldn’t in the next few months or years.”

Although warts commonly found in the body are harmless, warts found in the genitalia are a different story. Accordingly, genital warts should be treated as soon as possible since it can spread and grow in large numbers. It is also a common viral sexually transmitted infection (STI) so it is contagious and it can infect another person.

The same thing with moles; some people are born with it while other moles appear during childhood and adolescence. Although moles are generally harmless, some moles are cancerous. “If the mole is not symmetrical in shape, if it changes in color, size and shape, if it itches, painful and it bleeds, then the mole can be malignant or cancerous,” he says.

“Even though how much you don’t want to stare at their moles, it is quite a challenge since they are located on the face. You don’t want to be rude, pero ang hirap iwasan ng tingin,” he smiles.

Treatment and Removal of Mole, Warts and Other Skin Growths

“If you are concerned about a mole that shows signs that it might be cancerous, it is best to visit any of the 24 branches of RCC Amazing Touch clinics to have it treated and removed,” Dela Cruz reminds.

He also shares that RCCAT uses herbal cautery not just for the removal of moles, but also warts, milia, skin tags, xanthelasma and other skin outgrowths. “Our products are proven effective, safe, non-invasive, and relatively painless as compared to other forms of treatment.”

Although there are other treatments like surgery using a scalpel, laser surgery, cryotherapy (freezing), electrocautery (use of low electrical current), topical applications, and home remedies (they may work, but they often don’t), herbal cautery is still a safer alternative to effectively remove skin outgrowths. “Our treatment services need no anesthesia and relatively less painful. Parang kagat lang ng langgam. Kayang-kaya,” he quips.

He narrates that RCCAT can even treat warts, moles and other skin outgrowths located in sensitive areas like eyelids or nose. “Other forms of treatments can’t do that. If you will go for surgery, the skin around the warts or moles will be affected as well. But with herbal cautery, tinutumbok mo lang ang moles at warts, yun lang ang tinatanggal mo at hindi kasama ang skin around it.”

“We’ve been treating and removing warts and moles for 18 years now so our products and our treatments are proven through the years,” he proudly shares. He further shared that RCCAT products garnered several prestigious awards from coveted invention exhibits in the Philippines and across the globe. The inventions Demole (for the removal of moles) and Dewart (for the removal of warts) even won the highest awards in the British invention exposition.

“Our products bested other entries from inventors across the globe. We even garnered several Gold Awards from the World Intellectual Property Organization (WIPO) and that’s a feat that we are really proud of.”

“For almost two decades operating as RCCAT and almost 3 decades since our father Rolando C. Dela Cruz invented the herbal treatment, we’ve perfected our treatment methods to ensure the efficacy and safety of our product. We also offer free consultation and a guarantee of treatment. Clients can go back for a follow up treatment for free,” he says.

Although most of their clinics are located in the NCR, RCCAT also has some branches in Cebu, Iloilo and Bacolod. “We are gearing for a wider market reach through online marketing and we want to reach more clients, especially in areas that we don’t have clinical branches yet. Using online platforms like social media, through the help of our blogger friends, we can reach clients in different parts of the country, even those who are living abroad.”

The herbal cautery is a patented novel product of RCC Amazing Touch’s inventor Rolando C. Dela Cruz. The inventor was first a barber before he became a world-renowned inventor of several herbal cautery creams. As a barber, Dela Cruz was dedicated with his work. For him, giving his 100% will ensure that his customers are satisfied and that customer satisfaction in turn will give him more income, which he needed to send himself through college. And relating his experience as a young boy in Tarlac when the oil of the cashew nut burned the warts on his hands, barber Dela Cruz saw an opportunity to offer extra service to his parokyano or suki so that he could have many customers and more income.

The Awards and Products
Rolando C. Dela Cruz represented the Philippines in several coveted invention expositions and competitions in Germany, Russia, Great Britain, USA and neighboring countries in Asia. The inventor consistently bagged the coveted awards landing him in the top 3 spot, but most often the Gold Medal or the grand award. He even bested participants from more than 30 countries in the British Invention Show wherein he received the most coveted Obelisk Award.

Inventor Dela Cruz’ herbal cautery creams that removes moles (Demole) and warts (Dewarts) also gave birth to other herbal cautery creams for the removal of milia, skin tags, and xanthelasma. His success in herbal cautery also gave birth to the invention of DeBCC or the cream for the treatment and control of basal cell carcinoma, a type of skin cancer. DeBCC Cream, currently undergoing clinical trial for skin patients in the Philippine General Hospital (PGH), was even recognized by the stringent American College of Surgeons (ACS).

The Company
Established on March 13, 1997 and duly recognized by the Securities & Exchange Commission (SEC), RCC Amazing Touch International, Inc. has now 24 branches located in major cities in the Philippines. The company, mainly established through sheer dedication of inventor RCC and his family, started off in a tiangge stall in Greenhills, San Juan. The inventor together with his eldest son Richard B. Dela Cruz, President of RCC Amazing Touch, would conduct the demonstration on how to use to cream for the removal of warts and moles; while his other children would give out flyers to passersby.

Some passersby were curious enough to try their products, but some would even accuse them quack doctors or fly by night. But the efficacy of their products can’t simply be ignored that customers soon noticed and started availing of the treatments.