by Rhea B. Peñaflor

This year is different from all previous years for ScoreHigh! English Proficiency Center. This 2015, ScoreHigh! not only garnered the distinction of being consistently Top Performing International English Language Testing System (IELTS) Test Preparation Center in the whole region; it is now distinguished as Top Performing and Most Preferred IELTS Test Preparation Center in the Philippines.

WACKY. Team ScoreHigh poses after receiving the two distinctions as Top Performing IELTS Test Preparation (Review) Center in the Region and in the Philippines.

This award is conferred by the country’s leading IELTS Test Administrator: IDP Education Pty. Ltd. This is indeed, another first for Iloilo—another worthy of commendation.

IELTS is an English proficiency test required of everyone who wants to study, work or live in English-speaking countries like the UK, New Zealand, Ireland, Canada, USA, and Australia. Constantly adjudged as Top Performing IELTS Test Agent in Western Visayas since 2010, ScoreHigh! English Proficiency Centre’s secret is not novel.

ScoreHigh! and its battery of expert faculty is academically directed by Grace Tan-Novilla, who valued excellence ever since her college days when she served her university then as its Student Council Chairman and as Student Regent. She is also the first Bachelor of Arts majoring in English at West Visayas State University (WVSU) to graduate summa cum laude. She was, at the same time, named as Jose Rizal Model Student of the Philippines (JRMSP 2001), Ayala Young Leader (AYLC 2000) awardee, Outstanding Alumna of the 21st century at the Iloilo National High School (INHS), a consistent UP Presidential Scholar and an Outstanding UP Iskolar ng Bayan awardee. 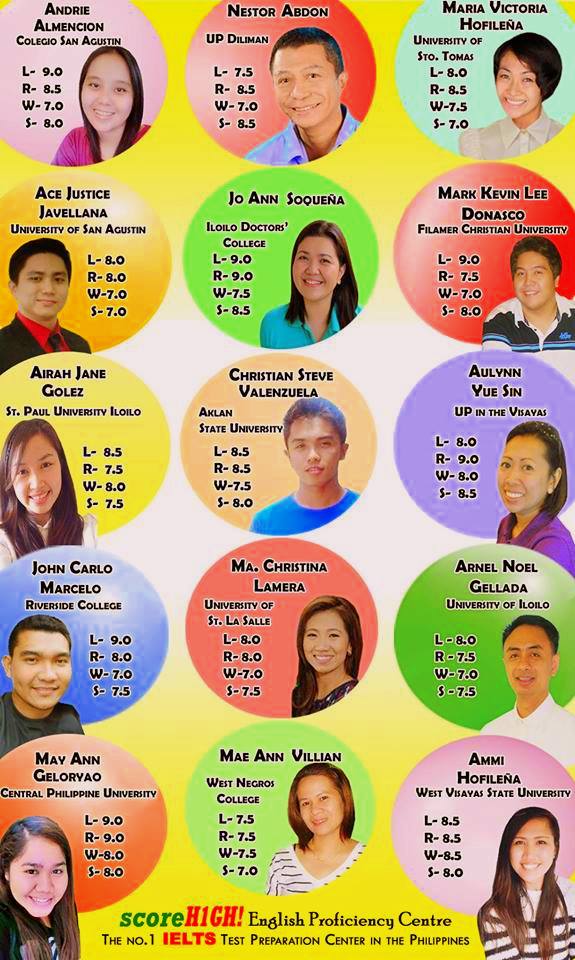 ScoreHigh has produced more than 300 IELTS topnotchers since its inception in 2009. This does not include the hundreds it has helped passed the test.

Grace, Academic and Operations Director, shares, “At ScoreHigh!, we don’t allow you to self-review. This is best done outside of the review center. When you are in our premises, we make sure we guide you through each of the tasks and process them for you and with you. We understand why you’re here. You need help.”

Lectures are conducted daily to ensure retention of the principles that the student needs on test day. An experienced and IELTS-trained coach is with the student each day for his consultation needs. Individualized and small-group coaching sessions are regularly conducted to boost the speaking and writing skills of the reviewee.

Novilla adds, “A reviewee needs expert advice from experienced and IELTS-trained coaches. We have 6 because you can only learn so much from just 1 or 2.”

Featured each week is a test topnotcher in its Facebook page (IELTS ScoreHigh English Proficiency Centre). Every week, ScoreHigh also features its alumni who already are living their dreams in the UK, New Zealand, Australia, Ireland, Canada and the UK.

To Ilonggos, ScoreHigh! is yet another first to be proud of!