For 64-year old pedicab driver Rogelio Palma Consalida, November 8, 2013 is one date he will never forget for the rest of his life. It was when super typhoon Yolanda made land fall in his hometown of Tacloban City in Leyte, and in just an hour he had lost all his possessions which took him several decades to build.

“Nawala sa amin ang lahat,” (“We lost everything,”) he declared and for over two years, he and his wife, Lolita, also 64, had to live in a cramped government housing site.

But life seems to smile on them once more as the couple are among the 400 family-beneficiaries of SM Supermalls’ biggest SM Cares Village for survivors of super typhoon Yolanda (Haiyan). 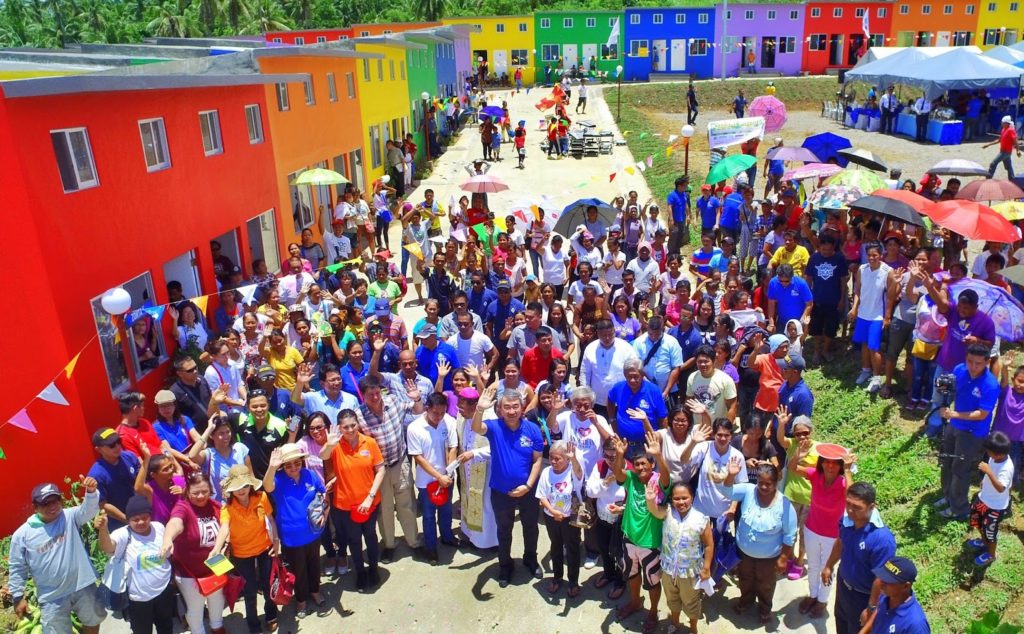 SM and its donors awarded 400 new houses in Tacloban City, Leyte to families who were hardest hit by the super typhoon in 2013. The village will be called “Pope Francis-CFC ANCOP Canada Community – SM Cares Village.” It is the biggest of all the four SM Cares housing project as the other villages only have 200 houses each.

The first village in Bogo, Cebu has been turned over to beneficiaries in November 2014 while the second village in Iloilo City was inaugurated in October 2015. The fourth and last village in Ormoc City is undergoing construction and will be turned over in July this year.

400 houses were awarded to chosen beneficiaries for free. Aside from the houses, the SM Cares Village also has amenities such a basketball court, street lamps, sewage treatment plant, materials recovery facility, rain-catchment system and provisions for water and electricity.

SM Cares, a division of SM Foundation and the corporate social responsibility arm of SM Prime Holdings, Inc., launched the housing project shortly after the onslaught of super typhoon Yolanda in November 2013 to give permanent and disaster-resilient houses to survivors of the typhoon in the Visayas region.

Through its tenants, business partners, service providers, employees and local communities, SM was able to raise the money needed to build the 1,000 houses, a moving proof of the people’s accord in times of emergency. Some of the donors for the SM Cares Village in Tacloban include Zonta Club, Duty Free Philippines, Forever 21, ANCOP, New Golden City Builders & Development and Philippine Daily Inquirer. Global Port and Sultan 900 donated the basketball court.

All the houses in the SM Cares Housing Village are disaster-resilient and have roofs made of concrete slab. Vetiver grass, with leaves that can be used for handicrafts, were used in the village to control soil erosion and for better slope protection. Its roots reach up to 3 meters long.

To ensure sustainability of the project, community development programs have been put in place to make the change work for all beneficiaries. For the Tacloban housing project, the Roman Catholic Archdiocese of Palo (RCAP) and Couples For Christ-ANCOP (CFC-ANCOP) were the partners in charge of selecting the beneficiaries, training, livelihood and values formation to enable the new residents start a new life in their community.

SM said the SM Cares Housing Village is a testament to the solidarity that Filipinos and people all over the world have shown to help the survivors of super typhoon Yolanda. It is also personifies SM’s commitment to nation-building.

“SM has always been supporting communities and as a responsible member of the community, this project exemplifies our commitment to nation-building,” SM Supermalls, in a statement, said.

To know more about SM Cares and its advocacies, please visit www.smcares.com.ph or www.facebook.com/OfficialSMCares.