Public-private partnership has brought many job opportunities for Ilonggos, according to city mayor Jed Patrick Mabilog in his message during the Labor Day job fair held here Sunday. 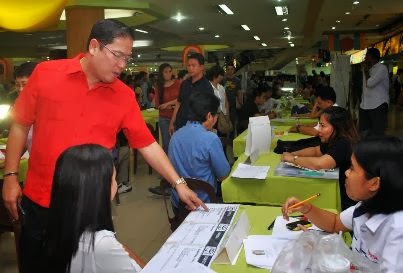 Mabilog cited that the unity, cooperation and support between and among the city government, business sector and the Department of Labor and Employment (DOLE) resulted in the massive growth of the city and province of Iloilo.

This partnership, which up to now remains intact, brought more than 15,000 new jobs that were made available to Ilonggos.

The one-day Labor Day job fair held in this city on Sunday has produced 63 hired-on-the-spot (HOTS) applicants, according to the Department of Labor and Employment (DOLE) here.

The HOTS at 22 percent is eight percent higher as compared to last year’s Labor Day job fair at only 14 percent.

Of the 63 HOTS composed of 22 male and 39 female, 61 were for local employment while two female are for bound for overseas employment.

In his message, Mabilog also recognized the business sector, which he said is taking good care of employees by providing them with benefits that could not be extended by the government.

The mayor, who is seeking his final term this May 9 polls under the Liberal Party, ended his message by quoting LP presidential candidate Mar Roxas during one of his visits here as saying: “The best of Iloilo City, the best of the Philippines has yet to come.” [via PNA]