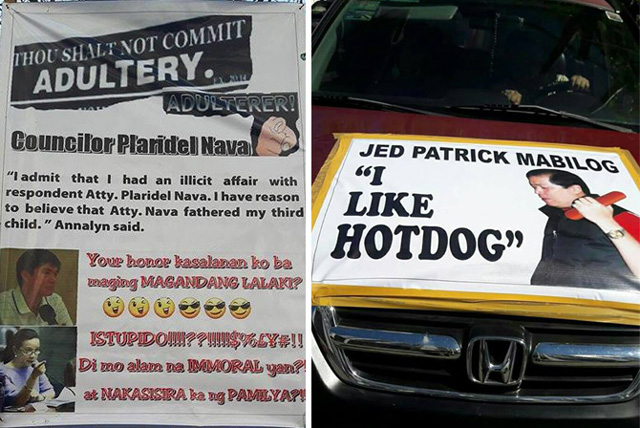 A large tarpaulin was installed in front of Iloilo City Hall in Plaza Libertad on Monday, with words accusing Nava of being an adulterer. It quoted a certain Annalyn who supposedly admitted to immoral relations with the councilor.

“I admit that I had an elicit affair with respondent Atty. Plaridel Nava. I have reason to believe that Atty. Nava fathered my third child,” the statement said.

At the lower portion of the poster were photo of Senator Grace Poe and words written as if she was scolding Nava.

The poster was immediately taken down, but members of the press and netizens had already took photos of it and shared in social media.

Barangay chief Sumakwel Nava, father of the councilor, also made his own tarpaulin poster insulting Mabilog’s sexuality and posted it in his car while driving around the city on Tuesday.

It showed an edited photo of Mabilog holding a hotdog with words, “I LIKE HOTDOG” written under his name.

The elder Nava admitted in an interview over Aksyon Radyo that he did it on purpose to get back at the mayor for calling his son adulterer in the tarp.

Mabilog denied that he ordered the posting of tarpaulin. In his official Facebook page, he said:

“I do not entertain below the belt and personal attacks on any person. Much more use this for political purposes. I stand by my PERFORMANCE and PROGRAMS benefitting the City and the Ilonggos. We are all mature and intelligent. I appeal for high level of campaign and politics in the City of Iloilo.”

Mabilog and Nava were once allies in 2010 and 2013 elections, but has started clashing in September last year due to traffic issues in the city. 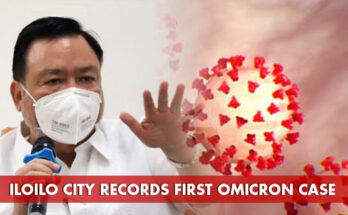