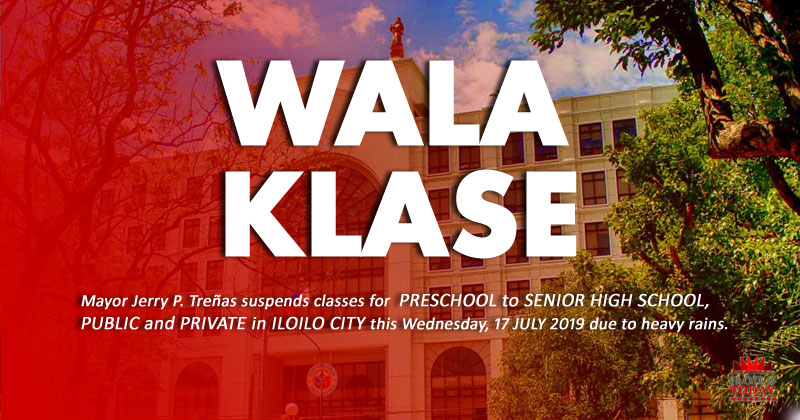 Iloilo City Mayor Jerry P. Treñas has cancelled classes in pre-school to senior high school in both public and private on Wednesday, July 17 due to heavy rainfall.

“As Mayor of Iloilo City, I declare the suspension of classes at the pre-school and elementary level in all public and private schools in the City of Iloilo, including high school and senior high school, TOMORROW, WEDNESDAY, JULY 17, 2019,” Treñas announced on Tuesday.

Brought by the enhanced Southwest Monsoon (Habagat) due to Tropical Depression Falcon, it will bring with it a forecasted volume of 13.5mm and shall affect the city from 12:00 midnight until 6:00 AM, the mayor noted, citing weather forecast.

“Given this, I am convinced that our pre-school children, elementary pupils, high school, and senior high school students, considered exposed and vulnerable population, should be protected from the possible effects of strong winds and heavy rainfall,” said Treñas.

“The cancellation of classes seeks to ensure the safety of our children from possible flooding and from any sickness, injuries or accidents as a result thereof. Their general welfare is the topmost concern of the city government. May we all work together for the safety of our people,” he added.

Treñas left it to the discretion of school administrators to cancel/suspend classes at the tertiary level.

The City Disaster Risk Reduction Management Office continues to monitor updates through DOST PAGASA and other related warning agencies on the weather conditions.

Members of Response Clusters are also on stand-by for any emergencies. (Iloilo City PIO)