The Municipality of Tubungan, Iloilo was recognized by the Department of Agriculture (DA) as the 2015 national outstanding organic agriculture municipality during the 12th National Organic Agriculture Congress held at SMX Convention Center, Bacolod City, November 25 to 27. 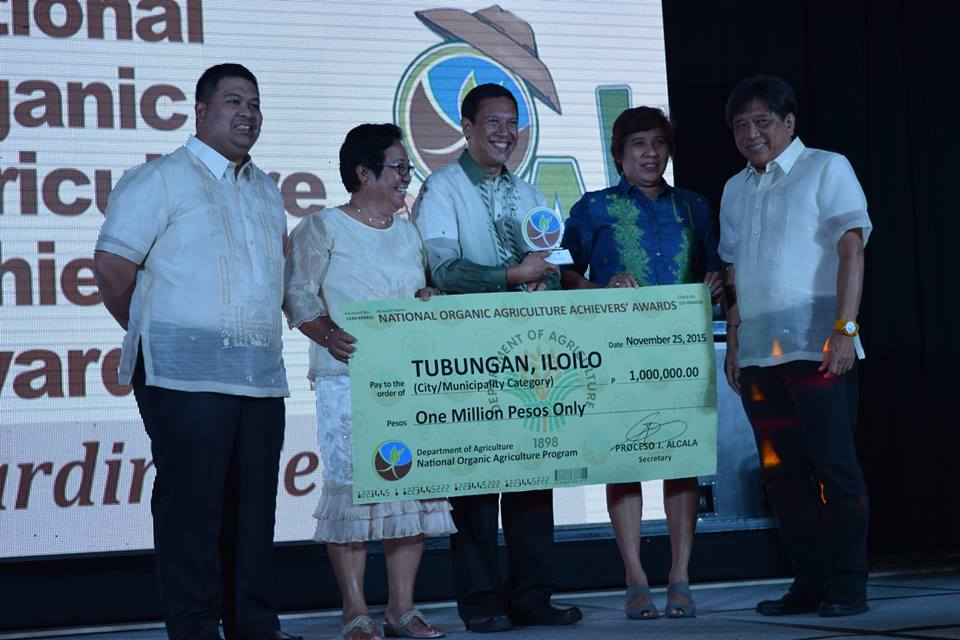 The DA provided several organic agriculture interventions to the municipality such as the Php750, 000.00 worth of mass production of organic fertilizer project consists of a wood vinegar and vermicomposting facilities as well as the conduct of season-long training on organic vegetable production, demo garden and field day.

Then in 2013, the Agri Pinoy Rice Program funded Php1.6 million worth of seed bank and plant nursery for the municipality of Tubungan. Other projects include the Php300,000.00 worth of Bottoms Up Budgeting Enhancement Program for Vegetable Growers of Tubungan, Php150,000.00 worth of organic model farm Palayamanan, construction of a farmers’ learning center on organic farming with nurseries of indigenous trees and fruits; 13 units of mini- shredders, Php52 million worth of farm-to-market road project, 43 units of small farm reservoirs,10 irrigation water sources, 5 units of multi-purpose drying pavement, 5 units of palay sheds, organic corn mill from PhilMech and National Organic Agriculture Board, and 5 units of greenhouses for the high value crops and vegetables.

Mayor Gargaritano was also thankful for the public-private partnership with the local government to the Tubungan Federation of Organic Farmers Assciation, Inc., DA assistance to all the public elementary and high schools, and the Community Participatory Action Research (CPAR) of the department.

Mario Avila, in his testimony, said that through the DA’s training on organic crop diversification, he was able to increase his income, provide the needs of his family and give his children access to education. He added that he is imparting to his fellow farmers the skills and experiences he obtained from the various trainings on organic farming that he attended.

Sec. Alcala told the representatives of the province of Aurora and the municipality of Tubungan to prepare project proposals on organic agriculture worth Php5 million each.

This recent National Organic Agriculture Achievers Awards (NOAAA) is the third year of recognizing the country’s best performers in the implementation of organic agriculture program.

Usec. Palad said, “the NOAAA was formerly called as the LGU awards which started even before the passing of the Republic Act 10068. It seeks to expand the number of groups, individuals and LGUs embracing organic farming.” [via DA RAFID]