Mandurriao PNP has released the partial video of ‘beach party’ in Plazuela de Iloilo that left 1 student dead and another hospitalized due to electrocution. 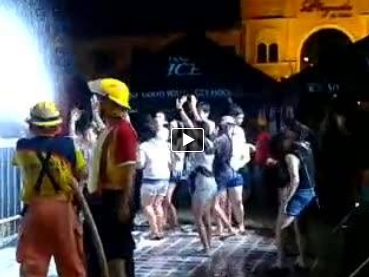 In the initial investigation of the police, Mar Valentin Conejar and Wilson John Baril suddenly collapsed after holding the steel railings while enjoying the Chasing the Sun Wet and Wild Party at the mixed use commercial center on Friday, March 7.

The party, which was organized by College of Management and Accountancy of Central Philippine University, continued after the incident.

RMN Iloilo posted a clip of the ‘beach party in the city’ on their Facebook page. Check the video below as uploaded in Youtube:
)

Triad Sound System issued a statement insisting that their wirings were all secure. The organizers have yet to issue their side on the incident.