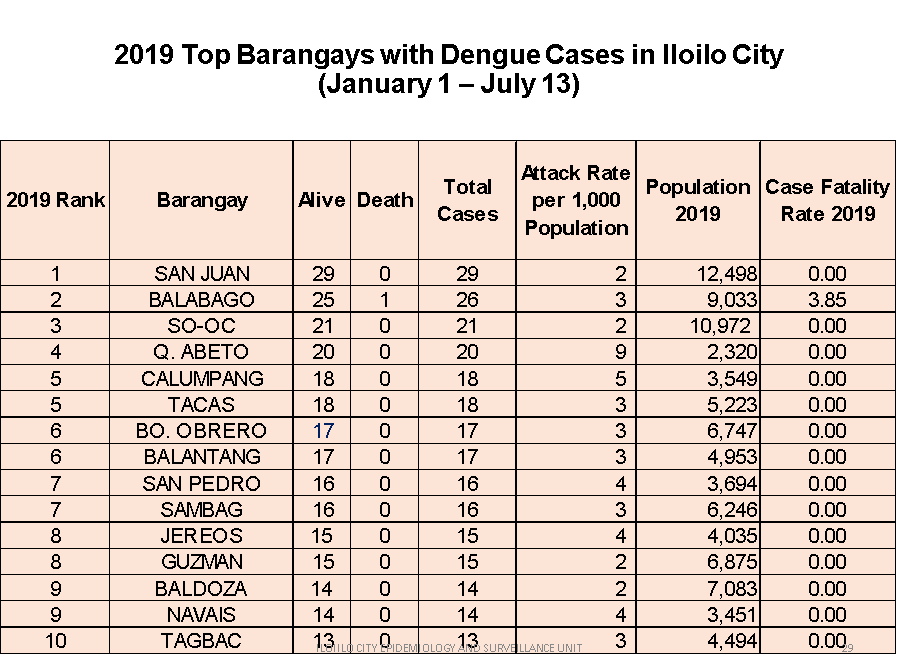 All eyes are on Iloilo City’s barangays with most dengue cases and cluster areas or those with three or more cases within four consecutive weeks to double efforts in prevention program.

Areas with clustering of cases and deaths are among the scientific evidence or surveillance information that supported the dengue outbreak declaration by Mayor Jerry P. Treñas Monday. The move seeks to intensify preventive measures after it has reached the epidemic threshold set by Department of Health (DOH). An epidemic needs urgent response.

Effective surveillance can help in reducing cases and deaths if areas with clustering of cases are identified early by health personnel.

The City Disaster Risk Reduction Management Council (CDRRMC) will launch anti-dengue orientation in Balabago, Jaro July 26. They hope to cover all these clusters by end of July.

CDRRMC passed Wednesday a resolution recommending the declaration of state of calamity. The City Council will hold a special session Friday for its approval. It will pave way for use of funds to purchase anti-dengue gears and testing kits and hiring of medical personnel.

City Health Office (CHO) reported six deaths and 868 dengue cases or 416.7 percent increase as of July 13. It exceeded 878 cases recorded for the whole of last year. CHO is still waiting for official report that it already reached 1,119 cases.

“The alarming dengue cases are continuing to rise everyday with more than three patients who are being positive for dengue test,” Treñas stated, citing CHO report.

Several pupils in public elementary schools succumbed to sickness spread through mosquito bite as the deadly disease mostly affects one to 10 year-old patients.

Massive cleanup operations are urgent to get rid of breeding grounds of dengue-carrying mosquitoes. This is because the rainy season has brought stagnant water fit for nesting found mostly at backyards, schools, plazas, marketplaces and other workplaces.

The most effective way to prevent dengue is still the 4S strategy – 1) Search and destroy mosquito breeding places; 2) Self-protective measures like wearing long sleeves and use of insect repellent; 3) Seek early consultation on the first signs and symptoms; and 4) Say yes to fogging if there is an impending outbreak, DOH cited. (Iloilo City PIO)