The Jalaur River Multipurpose Project (JRMP) will be started earlier than expected with the signing of the contract between the National Irrigation Administration (NIA) and Daewoo Engineering and Construction Co., Ltd. on September 03, 2018 at the Administrator’s Conference Room, 2nd Floor. NIA Central Office Building A, Diliman, Quezon City. 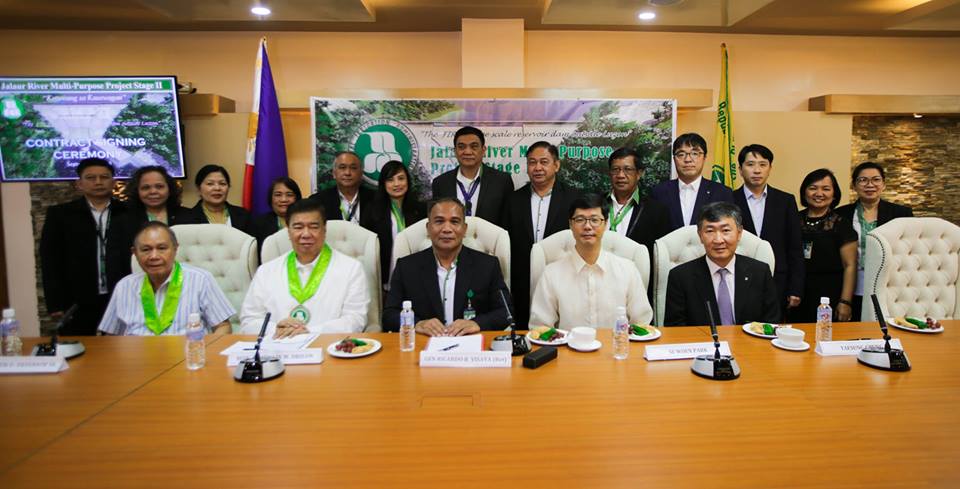 The P11.212-billion JRMP Stage 11 is the 8th big irrigation project to be ground break under the Duterte Administration, and the 2nd project to be funded by Korean Export-Import (KEXIM) Bank. The recently inaugurated PASA Small Reservoir Irrigation Project was the first project funded under a grant by the Korean Government through the KEXIM Bank.

The contract signing aims to pursue the construction of 109-meter Jalaur High Dam, 38.5-meter Afterbay Dam, 10-meter Alibutan Catch Dam, 80.74-kilometer Highline Canal, and its appurtenant structures. Groundbreaking is scheduled on the first week of October this year.
It is noteworthy to mention that the construction of JRMP was mandated under Republic Act (RA) 2651 enacted by Congress in 1960. Due to insufficient funds, the project was implemented in two stages. Stage I is the rehabilitation of existing irrigation systems covering an area of 22,340 hectares. Stage II is the construction of high dam, hydropower electric plant, domestic water supply, watershed management.

Stage 1 was completed in 1983. Stage 11 was stalled since 1988 for unknown reasons. After 30 years, JRMP Stage 11 will be started.
The construction of big and small ticket irrigation projects is in line with President Rodrigo Roa Duterte’s “Build, Build, Program” embodied in his 10-Point Socio-Economic Agenda envisioned to reduce poverty from 21.6% in 2015 to 13-15% in 2022.

When completed, JRMP Stage II would be the biggest dam outside Luzon. Viewed in the context of achieving the rice self-sufficiency program of the government, JRMP II is expected to provide tremendous economic benefits through the delivery of year-round irrigation water to 9,500 hectares of new irrigable areas and rehabilitation of 22,340 hectares covered by five existing irrigation systems in 23 municipalities and two cities in the Province of Iloilo, benefitting 24,000 farmers and their families.

The project will also provide other incidental benefits, such as flood mitigation, environmental and watershed management, promotion of eco-tourism, and fish culture. Furthermore, a 6.6-MW of hydroelectric power and water supply for domestic and industrial use of 1CMS will be later implemented.

The International Coordinating Council – Cabinet Committee (ICC-CabCom) of the National Economic and Development Authority (NEDA) granted the extension of the loan validity of 46 months which started in May 28, 2018 until March 28, 2022 and completion schedule to September 2021 from its original schedule of November 2017.
Incidentally, the eight (8) projects ground break were Chico River Pump Irrigation Project in Cagayan-Kalinga, Balog-balog Multipurpose Project in Tarlac, Bulo Small Reservoir Irrigation Project (SRIP) in Bulacan, Ibingan SRIP in Sorsogon, Benliw SRIP, Bonot-bonot SRIP, and Mabini-Cayacay SRIP, all three in Bohol, and LARISEP in Pangasinan.

Meanwhile, the NIA Regional Office XI will be conducting the Inauguration and Turnover Ceremony of Mal River Irrigation Project under the National Irrigation Sector Rehabilitation and Improvement Project (NISRIP) on September 21, 2018 at Digos City, Davao del Sur. NISRIP is a sector project funded by the Japan International Cooperation Agency (JICA). It has 11 projects located nationwide.

The rehabilitation of the Mal River Irrigation System (Mal RIS) amounting to P104.294 million includes the construction of six (6) units of Irrigators’ Association (IA) Offices (84 square meters each), three (3) units of combined IA offices and warehouse (200 square meters each), 16.1 kilometers of concrete canal lining, construction and repair of 20 structures, five (5) new steel gates, and 15.7 kilometers of grading and gravelling, among others. The project is expected to provide timely and reliable irrigation service to 3,146 hectares of agricultural land in the Municipalities of Matanao and Hagonoy in Davao del Sur, benefitting 3,783 farmers and their families. Mal RIS is located in Kiblawan, Davao Del Sur.

The National Irrigation Administration (NIA) will continue its mandate of providing reliable and sustainable irrigation services to our farmers through the construction of irrigation projects and rehabilitation of existing irrigation systems.

Finally, NIA is now ascertaining its vital contribution to the inclusive socio-economic growth and agricultural development of the country through an efficient, sustainable, and reliable irrigation service to the Filipino farmers, thus lowering the poverty incidence in the irrigated agricultural sector.