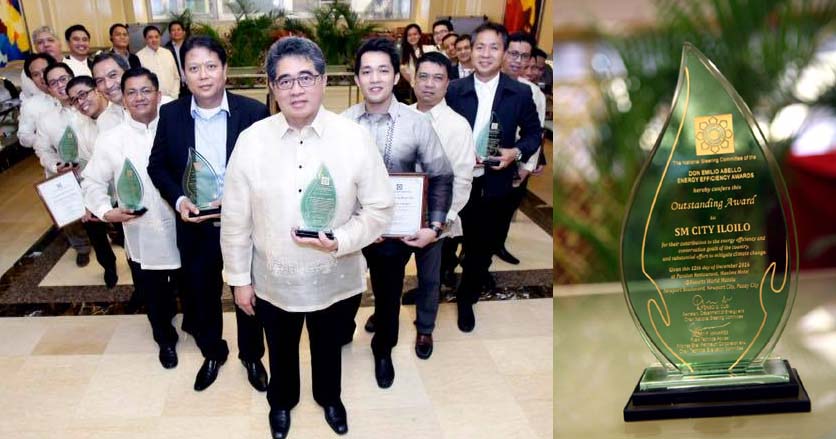 Organized by the Department of Energy as one of its activities in celebration of National Energy Consciousness Week every December, the Don Emilio Abello Energy Efficiency Awards recognizes the private sector’s effort to promote and to implement energy conservation.

The region’s biggest mall achieved 8.5% production energy savings or 478,076 liters of oil equivalent, which translate to about $350,000 in cost savings and 937,835 kilograms of avoided carbon dioxide (CO2) emissions annually.

These were obtained through energy efficiency measures that included the replacement of cooling coils, conversion to LED lights, and installation of cooling towers.

Iloilo City Government has been working with public and private partners such as SM City in promoting energy audits, energy efficiency measures, and greenhouse gas inventory as part of low carbon development strategies. Iloilo City is one of the pilot cities under USAID’s Partnership for Growth Cities Development Initiative.

SM City Iloilo has been participating in the City Government of Iloilo’s environmental campaign since February 2015.

Energy Secretary Alfonso G. Cusi said during the ceremonies that “the entire Department of Energy family congratulates and holds in the highest esteem the recipients of this year’s Don Emilio Abello Energy Efficiency Awards.”

“They collectively represent the ideal standard of excellence that we want society to uphold, and that we want others to emulate and replicate in the fast-evolving field of energy efficiency and conservation (EEC).” [Photo credits: Gino Jan Babao Facebook]