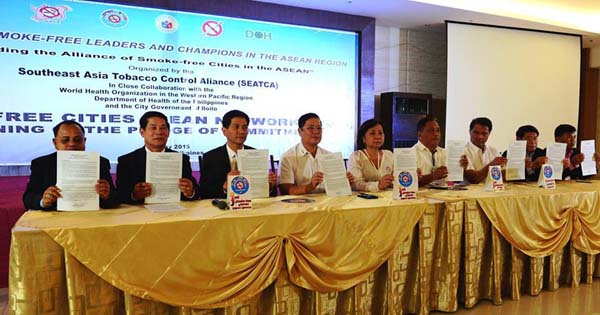 Chosen by mayors and anti-tobacco advocates, the selection was in connection to Iloilo City’s smoke-free enforcement initiatives and its citation as a liveable city in terms of promotion of human health and life.

Mabilog has also the crucial role of enticing other LGUs to be smoke-free, highlighting the city’s experience as well as that of other SCAN Philippine members.

SCAN brings cities together moving towards becoming smoke-free and a venue to share experiences, learn from best practices of various cities with different cultures in a common goal.

Iloilo City hosted the Asean conference on May 19-21, 2015, an opportunity only given to cities that exhibited exemplary practices and sustainability in anti-smoking advocacy and enforcement.

This year’s activity was attended by some 250 participants coming from 10 ASEAN countries including municipalities and cities, organized by SEATCA in close collaboration with Krabi provincial government , Action on Smoking and Health Foundation ( ASH) Thailand and World Health Organization in the Western Pacific Region (WPRO).

Iloilo City won the Hall of Fame 2012-2014 Red Orchid Search for Smoke-free environments by the Department of Health and has been consistent in influencing and mentoring other LGUs to do the same including New Lucena and Sta. Barbara in Iloilo; Buruanga and IBajay in Aklan; Sigma in Capiz; and Pandan in Antique.