Ilonggo boys duo ‘The Gentlemen’ once again captivated the hearts of the crowd in their performance at Judge Cuts round of America’s Got Talent on Tuesday (Wednesday morning, PH time), August 4. 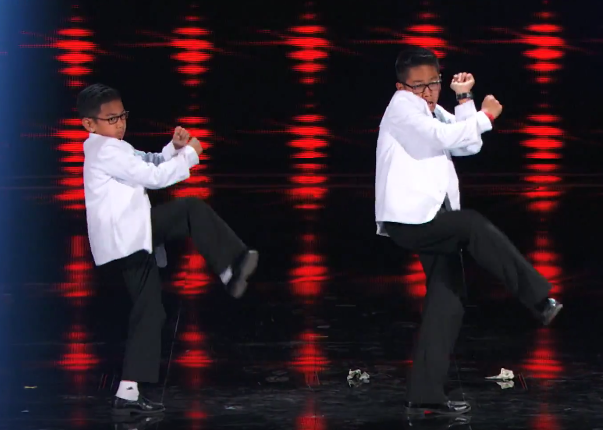 Update: The Gentlemen has advanced to the next round of America’s Got Talent ! Live shows round will be at Radio City Music Hall in New York.

Nine-year-old Cameron and 12-year-old brother Zach Belandres came out onstage in their white tiny suits and earned shrieks and applause from approving audience for their dance moves to the tune of Beyonce’s song “Superpower” featuring Frank Ocean.

Again, the ‘smooth moves’ with all the kicking and popping of hip-hop was there, much to the delight of their Ilonggo parents and fans. Watch:

Pierce Morgan was called back in the house to help judges Howard Stern, Heidi Klum, Mel B, and Howie Mandel scrutinize the performances of top 36 contestants. Here’s what they have to say for The Gentlemen:

“You made the crowd go crazy. Good job,” said Heidi.

“I’m a fan of yours. Here’s some advice, you’re choreography and music choice is very smart but it does tend a bit repetitive. If you want to win, you gotta listen to me,” said Howard.

“You gonna give what you got in every round. Obviously the stage is a bit big for you,” said Piers.

“I disagree. I couldn’t stop smiling. the fact the you are cute and you can move like that,” said Mel B.

“I think who you are and what you do is a package, I loved it,” said Howie.

Now the question is: Is their performance enough to get them to the Live Shows at Radio City Music Hall? We’ll soon find out as we follow The Gentlemen’s journey in America’s Got Talent 2015.